Librarians ‘contend with the oppressors within' at diversity conference

Librarians from all over the country convened in Los Angeles over the weekend to recommit themselves to diversity and inclusion.

At this year’s National Diversity in Libraries Conference (NDLC), which has been held annually since 2002 save for a three-year sabbatical, many of the nation’s most inclusive librarians gathered to discuss how they can “contend with the oppressors within.”

“Each of us must develop the capacity to recognize and contend with the oppressors within, as well as to value and nurture the aspects of ourselves that yearn for liberation,” a handout for the conference suggests, later posted to the NDLC website. 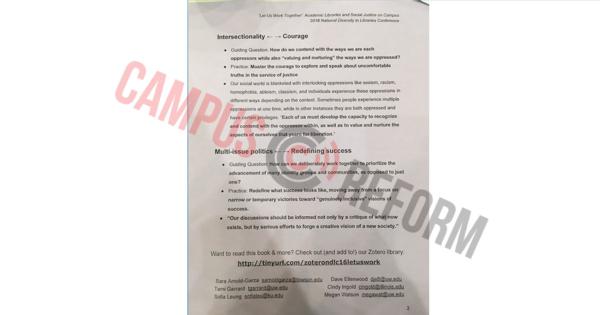 “Our social world is blanketed with interlocking oppressions like sexism, racism, homophobia, ableism, [and] classism, and individuals experience these oppressions in different ways depending on the context,” it continues. “Sometimes people experience multiple oppressions at one time, while in other instances they are both oppressed and have certain privileges.”

This year’s conference lasted four days and featured more than 50 different lectures on the relationship between libraries and diversity, including “Library Diversification and Transgender Bodies: A Metaspatial Approach” and “Macro Impact of Microaggression: Exploring Microaggressions in Librarianship.”

The theme for the conference was “Bridges to Inclusion,” which endeavored to “highlight issues related to diversity and inclusion that affect staff, users, and institutions in the library, archive, and museum (LAM) fields.”

Violations of the code of conduct were documented in an online reporting system, and could result in sanctions or expulsion from the conference without a refund.

Many of the conference attendees were active on social media, where they tweeted about the various lectures and panels.

“I want 2 know why white people can’t deal w @AprilHathcock saying she’d like space 2 talk amongst other POC w/out white people,” one attendee tweeted, apparently discussing a speaker who suggested setting aside segregated spaces for black people only. 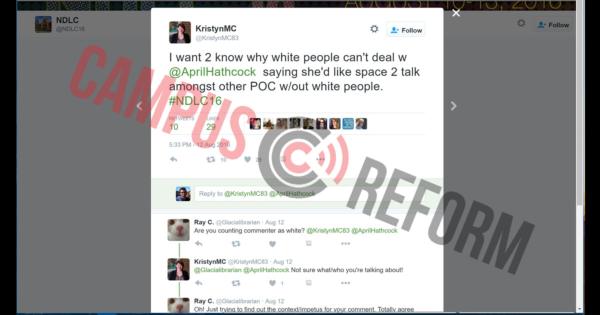 “We have got to get over this idea that we can’t have separate spaces. Let’s not pretend that it’s not necessary,” another tweeted in response to the same speaker.

Others discussed the role white people play in creating a diverse library, saying things like “We’re going to make progress when white people can deal with ‘productive discomfort,’” and “White privilege is being able to choose to avoid discomfort.” 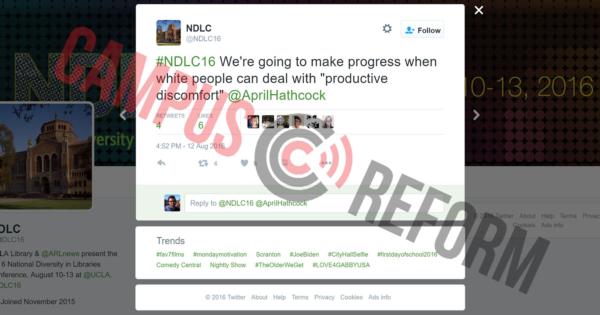 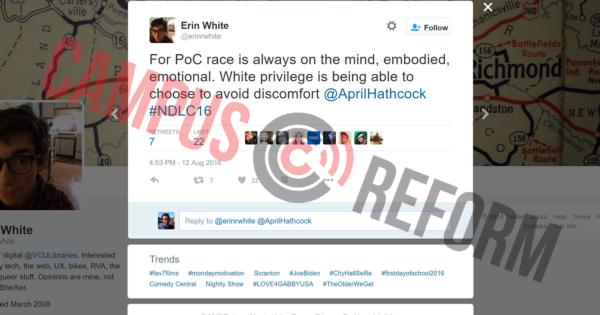 “What I want to say to my fellow white people, let’s stop being so freaking defensive,” another speaker added. 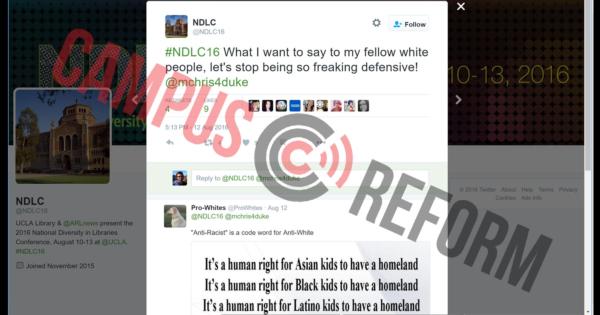 The conference was sponsored by over 50 different public and private school libraries, and took place at the University of California, Los Angeles.

Anthony Gockowski is the Editor in Chief at Alpha News. Previously, he was a Contributing Editor and an Investigative Reporter for Campus Reform. He previously worked for The Daily Caller, Intercollegiate Review, The Catholic Spirit, and The College Fix. In 2015, he was named a fellow for the Student Free Press Association. His reporting is regularly featured on Drudge Report, Fox News, National Review, and more.