For its summer “common reading” assignment, Tufts University asked incoming freshmen to read a text that trashes conservative media as a mechanism that over-sensationalizes news.

The Outrage Industry, which was co-authored by Tufts Professors Jeffrey Berry and Sarah Sobieraj, suggests that in recent decades, media outlets—especially conservative ones—have provided their viewers with sensationalized news coverage, leading to hyper-partisanship and “outrage.”

As is the case each year at Tufts, incoming freshmen are assigned a “common reading,” which is followed by seminars and discussions when students finally arrive on campus.

The Tisch College of Civic Life and the Office of the Dean of Undergraduate Affairs, both of which co-sponsor the annual program, claim that the purpose is “to foster conversation and engender a sense of community to help ease the transition to college life.”

This year’s selection, however, took a particular jab at conservative media, suggesting that hosts and commentators on the right use fear mongering and conspiracy theories to foment partisan reactions among their viewers.

As such, the book claims that the resulting “outrage” led to the rise of such movements as the Tea Party, which it argues moved the Republican Party further away from the center.

A university spokesperson, though, defended the selection, telling Campus Reform that it offers students a “shared intellectual experience” while providing them “with the first of many opportunities to discuss political and social issues inside and outside the classroom.”

Students who were asked to read the book had mixed reactions to its content, with one anonymous student telling Campus Reform that they thought it was the “right choice.”

“I think it’s the right choice. The president thinks it’s okay to attack and demonize anyone he wants. The same goes for Fox News, which I think is the origin of most conservative propaganda,” the student explained.

Student Henrik Tiemroth, though, sees things differently, telling Campus Reform that “I think it’s obvious the administration is pushing their political agenda” by assigning the book.

“I get the impression that, from the top down, there is a ‘right and wrong’ view to have at Tufts,” Tiemroth elaborated. “They should pick less-political books and discuss something that isn’t going to be so divisive.”

Similarly, Elliot Shin, a member of the school’s College Republicans chapter, regarded the selection as an “outwardly partisan statement by Tufts administrators and faculty.”

“They do this sort of thing often,” he noted, recalling that last year, in response to then-candidate Trump, Tufts chose Lives in Limbo for its common reading program, a book critical of United States immigration laws. 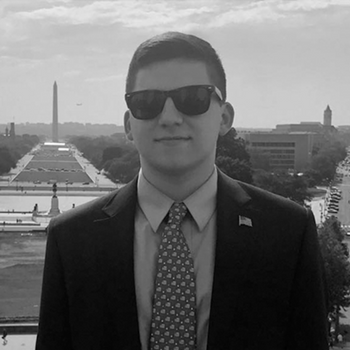