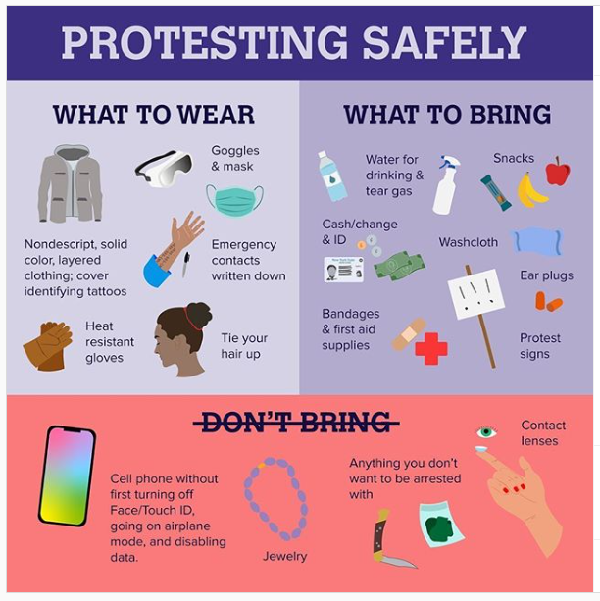 Tufts University recently posted information on “how to protest safely during a pandemic," using the same infographic promoted by Democratic Rep. Alexandria Ocasio-Cortez.

On the Tufts University Student Life Health Service page is information noting that “in the last few days, many Tufts students have joined others from around the world in protesting racial injustice. We have attached some information that may be helpful during this time.”

"Overtly supporting BLM makes me feel as if they are not accepting of Republican or conservative students.”

Among these resources is a graphic that explains what to bring and what not to bring to protests if protesters want to do so “safely.”

The graphic recommends bringing a face mask, clothing to cover identifying tattoos, and water to combat tear gas. It says not to bring “anything you do not want to be arrested with,” alongside cartoon images of a knife and marijuana.

Upon the university’s posting,  one student spoke out against the “endorsement” of such ideas. One student told Campus Reform that the elements included in the graphic suggest that the university is aiding students in attending violent riots, adding that the encouragement goes against the purpose of University Health Services.

[RELATED: Prof says those who support cops are racist]

“The purpose of health services, at least as I see it, is to not only see that every student is safe, but more importantly to ensure that every student is accepted for who they are,” the student told Campus Reform. “While I understand that they are trying to promote safety if a student may choose to protest (the infographic suggests that one may be attending a violent riot, however), overtly supporting BLM makes me feel as if they are not accepting of Republican or conservative students.”

When asked about the fact that some students feel the promotion of “safe protesting” in this way may promote the opposite of safety, University Spokesperson Patrick Collins told Campus Reform that it is “disingenuous” to assume that the University was encouraging unsafe protests, and continued to emphasize and encourage civic engagement.

“It is disingenuous and intentionally misleading to suggest the information encourages students to protest, or warns them that they all will be arrested, or incites them to protest violently,” Collins said. “Tufts has a long history of encouraging civic engagement among its students in the spirit of responsible citizenship, and we’re proud that many of our students actively engage in a variety of efforts, ranging from volunteerism to petition drives to marches, to make their voices heard on important issues of the day.”