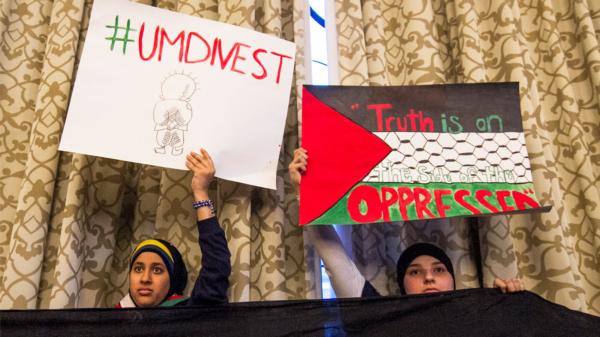 After weeks of clashing between pro-Israel and pro-Palestinian groups on campus, the University of Michigan’s student government struck down a controversial divestment resolution Wednesday morning.

The Central Student Government (CSG) heard impassioned speeches from both sides of the issue Tuesday evening going late into the night. Hundreds of students attended the meeting with more than 2,000 viewers watching the five-hour-long live stream online.

“I think it would have been very difficult for everyone, based on the comments made [Tuesday night] to say this was a broadly desired thing.”

But early Wednesday morning, CSG ultimately decided to reverse last week’s indefinite postponement of Assembly Resolution 3-050, A Resolution for the University of Michigan to Divest from Socially Irresponsible Companies that Violate Palestinian Human Rights, and struck it down. The resolution put forth by Michigan’s Students Allied for Freedom and Equality (SAFE) was rejected by a 25-9 vote with five abstentions in a secret ballot.

“Clearly this conversation on this topic needed to happen but it’s not the time to spend time on this resolution when we have other things to focus on [here] on campus,” CSG vice president Bobby Dishell told Campus Reform, stating he would rather focus on student initiatives—such as creating a student presidential search committee—that would have a greater impact on the student body.

Dishell, a 21-year-old public policy major, said executive members of CSG are not allowed to vote on matters of the assembly, meaning that he and President Michael Proppe could not cast a vote on the resolution. Both Dishell and Proppe did address the hundreds of students in attendance at the meeting prior to the assembly debate.

“I think it would have been very difficult for everyone, based on the comments made [Tuesday night] to say this was a broadly desired thing,” Proppe, a senior business and statistics major, told Campus Reform. “There was definitely dissent on the issue. If we’re going to pass this resolution, there needs to be a consensus on campus. And there was not a consensus.”

Proppe said while the authors of the resolution “did a really nice job of bringing in personal experiences to the argument,” he was still under the impression that many members of the CSG assembly were unsure of the merits or complete validity of the resolution presented.

Last week as Michigan’s CSG voted to indefinitely halt the resolution, a media frenzy escalated as SAFE and members of 36 other student groups organized a multi-day sit-in, arguing that the student government had not properly listen to their concerns. Tensions ran high on both sides as reports of death threats, racial slurs and “overtly threatening” social media posts escalated.

Both Dishell and Proppe told Campus Reform that as of late Wednesday night, no conflict had arisen from the student government’s decision. Proppe said he expected to see some fallout but attributed much of last week’s conflict to “people outside of campus who see things on the Internet and start targeting people on social media.” With #UMdivest trending in the Ann Arbor area over the past several days, Twitter users have been able to participate in the conversation from all over the world—contributing both statistics and racial smears.

“Students are generally pretty respectful on campus,” Proppe said. “I think there are still students who are being made to feel uncomfortable because of their opinion one way or another because of the resolution, and I don’t know if all that is from students. I think some of that is coming from outside.”

Regardless of how CSG was to vote, Proppe said he did not believe Michigan’s Board of Regents would have chosen to take up the divestment resolution as an inherent policy, although he did say that the administration has cited student assembly resolutions in the past.

“The Board of Regents would not, I think, vote to divest from these companies whether or not the Central Student Government put forth the resolution,” he said.

A university spokesperson declined to comment other than directing Campus Reform to a verbose statement the university made in 2005 regarding divestments.

“The primary purpose of our endowment is to generate the greatest possible income, subject to an appropriate amount of risk, in support of the University’s missions of teaching, research and service,” the statement says.

However, the policy does assert that there may be “unusual instances” in which Michigan could make exemptions.