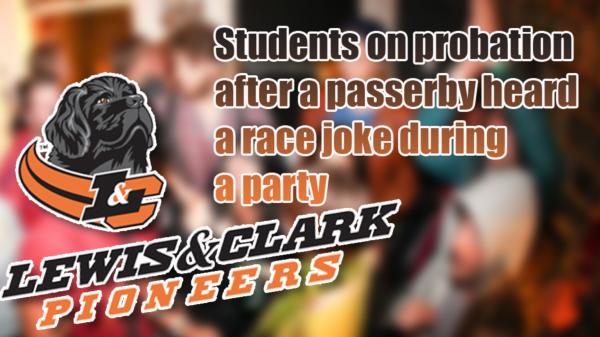 An inside joke made at a party has sparked Lewis and Clark College (LC) in Portland, Ore., to hand down severe disciplinary sanctions on two football players—one black and one white.

According to the Foundation for Individual Rights in Education (FIRE), a national university free speech organization that has reprimanded the school in a six-page letter, a pair of friends exchanged some inside jokes while at an off-campus party in November.

“Most universities will say that they share dual commitments to free speech and to the ideals of diversity, civility, and inclusion. But when incidents like this bring those into conflict, universities often seem to think they have to pick one over the other, and free speech often loses out when they do.”

During a game of beer pong, a black football player named his team “Team N***a.” Each his team scored, he shouted its name. At one point, the pair referenced an inside joke and exchanged two sentences roughly along the lines of "Can I get a 'white power?'" "White power!"

While no one attending the party was offended, another student passing by heard the slurs and reported them. The school then hauled the two players before the College Review Board, which found they had used “discriminatory language” and placed the players on unconditional probation for a year.

If the players were to get in trouble again during the probation period, they could be suspended from the college.

“And as for this case, I think universities are prone to taking incidents like these and thinking the solution is simply to go after and ban the offending language and punish its speakers, trampling on their right to free speech in the process,” Peter Bonilla, director of FIRE’S Individual Rights Defense Program told Campus Reform.

“Most universities will say that they share dual commitments to free speech and to the ideals of diversity, civility, and inclusion. But when incidents like this bring those into conflict, universities often seem to think they have to pick one over the other, and free speech often loses out when they do.”

The letter FIRE sent to LC on April 18 outlined the organization’s free speech and due process concerns and ultimately asked for the charges to be dropped and for the players’ records to be cleared. FIRE is hoping to hear back from the university within the next few days.

According to Bonilla, this case isn’t unique.

“As for campus parties in general, I see the hypersensitivity especially toward theme parties as getting distinctly worse and knee-jerk accusations of racism and discrimination over even mildly subversive or satirical themes becoming more predictable all the time,” he said. “In those situations, students’ sense of the right not to be offended is on full display.”

LC, which is a private institution and is not held to the same First Amendment standards as public universities, declined to comment on the case.