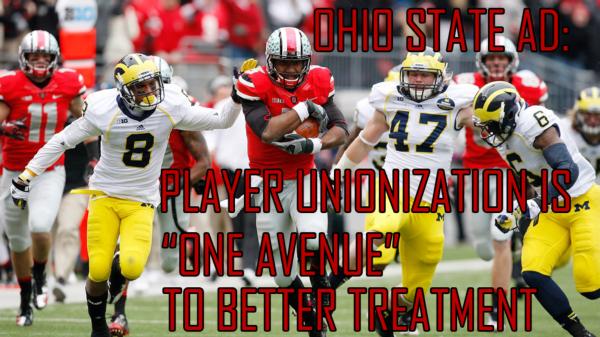 Northwestern University, led by former quarterback Kain Colter, got the ball rolling earlier this year when they received unprecedented recognition from the National Labor Relations Board (NLRB), which designated them university employees and gave them the right to unionize.

“Frankly, when you think about the conversation that Colter initiated, it’s really welcome because there needed to be a big continued focus on student-athlete welfare and time demands.”

“My primary concern is how student athletes are treated,” Smith, who was promoted to vice president of the university in January, told Campus Reform in an interview. “Frankly, when you think about the conversation that Colter initiated, it’s really welcome because there needed to be a big continued focus on student-athlete welfare and time demands.”

For Smith, that focus could include unionization of players, despite lawmakers attempting to block the effort.

While Ohio State and Northwestern are both members of the Big Ten conference, there is one staunch difference—Northwestern is a private university. Smith said Ohio State’s status as a public university probably propelled state lawmakers to create the provision in this year’s budget clearly stating that “students attending state universities are not public employees based upon participating in athletics for the state university.”

Smith, who has served as the Buckeyes’ venerable athletic director for 14 years, doesn’t have any qualms about future recruiting for his school even while some universities in the conference may have the right to unionize while others would not.

“We’re blessed at The Ohio State University to have such a great rich tradition and history and have been able to attract academically and athletically talented athletes, so I think who we are on our platform at our institution, I think we will be able to continue to attract top-notch athletes.”

Ohio State lays claim to 36 conference titles and seven national titles, the latest in 2002. The Buckeyes vacated their 2010 season after the NCAA found five players, including then-quarterback Terrelle Pryor, had violated regulations by trading signed memorabilia for perks such as tattoos. Jim Tressel, who was Ohio State’s head coach at the time, was suspended and fined as well. He later would resign.

“I support the need to provide better healthcare, to provide more support academically to those who leave early [for degree completion programs] and I support the idea that student-athletes should receive additional funding above and beyond their current scholarship,” Smith said. “Hopefully the new governance structure [of the NCAA] will allow us to modify our rules so we can go about those issues.”

Both the NCAA and the Big Ten conference have publicly condemned the NLRB’s decision to recognize student-athletes as university employees.

“While we respect the process followed by the National Labor Relations Board, we disagree with the ruling,” a conference spokesperson told Campus Reform in March. “We don’t believe that student-athletes are university employees. The issues raised during the hearings are already being discussed at the national level, and we believe that students should be a part of the conversation.”