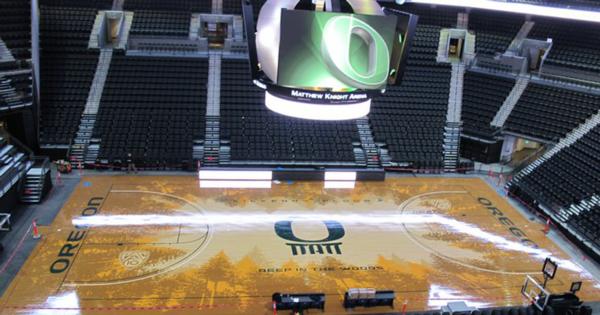 Three University of Oregon (UO) basketball players have been found guilty of sexual misconduct by the university and are banned from campus for up to 10 years—even though the university withheld its decision until after the March Madness tournament.

According to John Clune, the attorney for the alleged victim of the March incident, Brandon Austin, Damyean Dotson, and Dominic Artis have been banned from campus for as long as the victim stays at UO, which means a minimum of four years. The suspension, which includes a no-contact order with the student, was verified to Campus Reform by a university spokesperson late Monday night.

“As in all cases of sexual misconduct, we provide information to the complainant and the accused about the results of our administrative proceedings,” Julie Brown, senior director of communications at UO, told Campus Reform. “It appears that the information released by Mr. Clune is accurate. As has been said before, each young man had previously been given their full release and permission to contact any school.”

All three student-athletes were suspended from the UO basketball team on May 1 and discontinued participation in team activities. The suspension came after the Lane County District Attorney declined to pursue prosecution on April 14, citing “insufficient evidence.”

Alex Gardner, the Lane County District Attorney, released a statement last month claiming that the “no-file decision is based entirely upon analysis of the available evidence and it’s [sic] insufficiency to prove the allegations beyond a reasonable doubt.”

Gardner found that the alleged victim and assailants described the night similarly in terms of the sexual activity as well as the timing and order of events.

“The principal differences between the versions of events told by the alleged victim and the alleged assailants centers on the apparent level of victim intoxication and whether and at what point the victim expressed a desire to either not have sex, or stop having sex,” he said in the statement provided to Campus Reform.

In an email to Campus Reform, Gardner said the previous statement was still relevant especially as another witness came forward after the no-file decision who supported the decision.

Despite the DA’s decision to not file charges, UO is still required to conduct an investigation and adjudicate sexual assault accusations involving students on their own under the Title IX federal gender-equity law. Universities must determine guilt based upon the preponderance of evidence standard (is it more likely than not that the accused perpetrated the crime) as opposed to the court’s standard of beyond a reasonable doubt (when the accused must be definitively proven to have carried out the crime).

"A university system has some independent ability to define unacceptable behavior for students in general and scholarship athletes in particular," Gardner told Campus Reform. "In some cases a university may evaluate the acceptability of a behavior irrespective of whether the behavior at issue is criminal. In other words, a university may decide that a student's behavior is unacceptable and contrary to scholarship agreements and the best interests of the university community even if the conduct they can prove is not criminal."

In a graphic police report, the victim—a freshman at UO—alleged that she had been drinking alcohol at a house party when she met the three basketball players. According to the police report, she recognized Artis, Austin, and Dotson because of the “basketball cards they hand out at games” and they called each other by their names several times throughout the night.

The freshman claims in the police report that she was sexually assaulted by all three men simultaneously several times throughout the night while at the party and later after they had convinced her to accompany them to a different apartment.

“I thought, maybe this is just what happens in college...just college fun,” the victim says in the police report regarding the first incident at the party.

“I think I gave up. I let them do whatever they wanted. I just wanted it to be over and to go to sleep,” she said.

According to a statement from Artis’s attorney, Greg Varalrud, UO’s decision to ban the three players from the university was did not come as a shock.

“We were not surprised at the university’s action, even though a wealth of evidence supporting consensual conduct was presented,” the statement reads.

“Some weeks back, the university’s president, without hearing or effort to impartially review facts first, dismissed the students from the team, all but declaring them guilty. While perhaps providing some cover from the broad attacks on the university’s handling of the initial complaint, those statements surely dictated today’s action. It’s unrealistic to expect the subordinates responsible for both alleging and determining a conduct violation would act to contradict those declarations no matter how strong the evidence showing consent,” Varalrud said.

Austin, a sophomore, was suspended from his previous school because of a sexual assault accusation. Providence College suspended him from their team after allegations of “non-consensual sexual penetration.” He transferred to UO before Providence’s vice president attempted to overturn the decision.

The alleged incident occurred the night of March 8—the weekend before the Pac-12 men’s basketball tournament. UO faced harsh criticism for failing to include a March 9 report to the University of Oregon Police Department in its police log and for allowing the three basketball players to continue to compete in the NCAA March Madness tournament, where the 7th ranked Ducks made it to the Sweet Sixteen round before being eliminated by Wisconsin.

“I am angry with the culture that appears to exist in our athletic department that prioritizes winning over the safety of our students,” the alleged victim said in an anonymous letter provided to UO’s student newspaper earlier this month courtesy of her attorney.

Austin was ineligible to play last season, but Artis averaged 4.1 points and 2.2 assists in UO’s first nine games before he was suspended for selling team gear. Dotson averaged 9.4 points as a defensive stopper.

“In all reports of any misconduct including sexual harassment, intimidation or violence, the university works to protect and support the students involved,” Brown told Campus Reform. “Student safety is our top priority. The UO is working with the campus community and an expert panel to review our prevention and response practices.”

UO was under investigation by the U.S. Department of Education for violating the Clery Act.