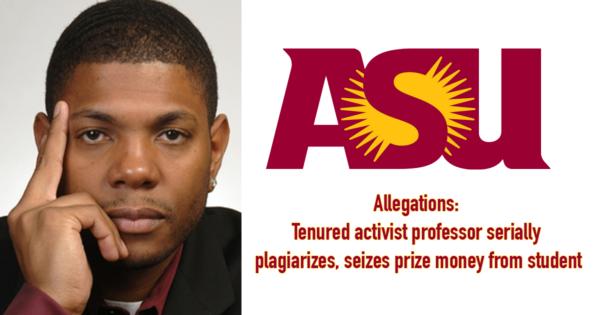 An Arizona State University (ASU) professor has been accused of plagiarism for the second time—allegedly failing to cite sources in speeches, articles and books, and seizing prize money for a video produced by one of his students.

Dr. Matthew C. Whitaker, who teaches history and is the director for ASU’s Center for the Study of Race and Democracy (CSRD), has been accused of plagiarizing several times in his newest book, Peace Be Still: Modern Black America from WWII to Barack Obama.

“I was extremely disappointed to hear that I wouldn’t be getting any of the prize money, I was going to use it to pay for my senior year of college so my family didn’t have to.”

“The Cabinet of Plagiarism,” an online blog, accuses Whitaker of pulling information from uncited sources including infoplease.com, Take40.com, the Archive of American Television, and the book African American Odyssey. The blog makes the claim that Whitaker gives insufficient citations at times while failing to mention other sources entirely which Inside Higher Ed backed by creating a side-by-side comparison of the original text to Whitaker’s take.

Whitaker has already promoted his new book, published by the University of Nebraska Press in January, by traveling around the world, speaking on panels, and keynoting dinners and events. So far, the book has won the 2014 Bayard Rustin Book Award and garnered good reviews on Amazon.

Adam Boyd, a 2009 ASU graduate, had Whitaker as his thesis director. He says that while he’s disturbed of accusations of plagiarism by his favorite professor, he believes they are misplaced.

“I can assure you that these claims are meritless and Dr. Whitaker is nothing more than the unfortunate victim of an academic witch-hunt,” said Boyd in an e-mailed statement to Campus Reform.

“A basic search on Google Books reveals that at least one of the online ‘examples’ of his alleged wrongdoing is patently false,” Boyd continued. “I am incredulous that someone who cites an author 49 times in one chapter is being accused of claiming said author’s work for his own.”

However, this isn’t the first time the history professor has been accused of plagiarism.

In 2011, after a decade of employment at ASU, Whitaker was under review for promotion to a tenured professorship. However, several of his colleagues signed a letter of concern to ASU President Michael Crow regarding his academic integrity.

In the letter, Whitaker’s colleagues allege that he plagiarized much of his work, including speeches, published articles, editorials, and textbook additions.

During a speech given at North High School in Phoenix, Ariz., Whitaker spoke word-for-word from a 2006 Washington Post article—US Immigration Debate Is a Road Well Traveled. In the speech, he did not reference the article; a citation to the article was provided in the “about” section of a video recording of the speech uploaded to YouTube by a third party.

The committee also discovered that in a textbook he authored, African-American Icons of Sport: Triumph, Courage and Excellence, Whitaker allegedly pulled paragraphs about the tennis playing Williams sisters and Muhammad Ali straight from Wikipedia.

“[T]he question of the motive of my accusers cannot be ignored, including racial bias, resentment and harassment against a black professor promoted to full professor over their objections,” Whitaker said in a letter to ASU at the time.

Whitaker’s accusation of racism was denied by Monica Green, who was head of the History Promotions and Tenure Committee when Whitaker was reviewed and promoted.

Instead, Green, who is also African-American, said the committee was “manipulated by the administration in a way I felt was guaranteed to produce the result.”

Whitaker was promoted to a tenured professor—and also granted a Foundation Professorship which included funding for the CSRD—despite the committee recognizing his “occasional carelessness in the use of materials and sources and some less than optimal detail in attribution” in its May 2012 decision.

In protest of the university’s decision, Green resigned shortly after.

In a statement emailed to Campus Reform, Green said she had not seen recent works of Whitaker’s but did note that “[t]his case raises a lot of questions that go beyond ‘liberal’ or ‘conservative’ politics and that get at what our society’s notions of ‘truth’ can and must be in this digital age where every utterance is researchable and dissectible a million times over.”

Whitaker declined an interview with Campus Reform but said in an emailed statement that he plans to "continue to work as hard as I can to educate and serve."

When ASU’s Department of letters and Science were made aware of these plagiarism accusations earlier this year, university officials attempted to contact Whitaker but could not locate him. Instead of teaching his scheduled classes, he was allegedly on a Mediterranean cruise, according to an ASU staff member who wished to remain anonymous for fear of retribution from the university.

But Whitaker's alleged academic dishonesty doesn't just affect his own work. According to Cydney McFarland, an ASU student who formerly worked in the CSRD, Whitaker has gone so far as to take the entirety of a financial reward for a video project she did as directed by his center.

McFarland was encouraged to submit the video she created while working for the CSRD to the "What is Democracy" contest on Challenge Post., sponsored by the Illinois Humanity Council and MacArthur Foundation. According to McFarland, she made a verbal agreement with Whitaker’s immediate supervisor that if she were to win, the prize money would be split in half; she alleges that Whitaker was fully aware of the arrangement.

Using all of her own video equipment, McFarland spent a total of two months on the project, sometimes working overtime into the night in order to meet the deadline. The video, “Dear Democracy,” won the second place of $20,000.

However, McFarland says that Whitaker failed to uphold his part of the bargain and took the entire prize. 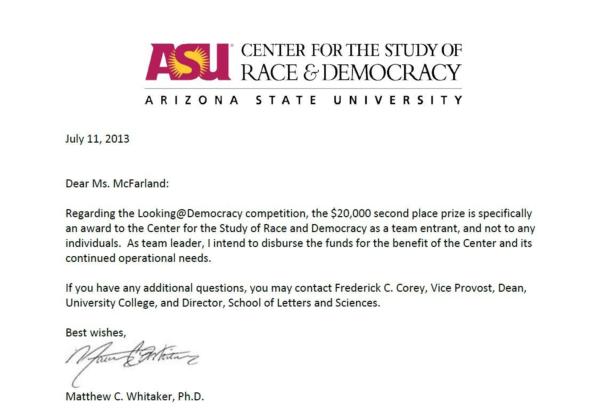 “I was extremely disappointed to hear that I wouldn’t be getting any of the prize money,” McFarland told Campus Reform. “I was going to use it to pay for my senior year of college so my family didn’t have to.”

Whitaker has the video posted on his online portfolio under his awards and distinctions.

Whitaker’s syllabus takes a clear stance on plagiarism in his own classroom. The syllabus for his African American History Since 1865 class stresses the importance of academic integrity, and states a student will get a failing grade for failing to turn in an original paper.

Additionally, ASU has a strict code of ethics. Although it talks exclusively about students’ academic integrity, it clearly defines behaviors which may be considered unethical. ASU’s official student academic integrity policy defines plagiarism as “[u]sing another’s words, ideas, materials or work without properly acknowledging or documenting the source.”

Failure to do so in a class, internship, externship or field work could result in an XE grade—which denotes the failure is due to academic dishonesty. Students with an XE grade lose privileges such as participating in extracurricular activities or running for office in a student organization.

The Department of Letters and Sciences told Campus Reform that they could not comment at this time. Whitaker is currently scheduled to teach classes for the fall semester.

This is not the first time a professor at ASU has been accused of plagiarism. In 2008, Dr. Theresa Cameron was a tenured professor teaching in the College of Design at ASU—the first African-American woman to do so. She was fired by President Crowe for plagiarizing her class syllabus, among other charges.

ASU Media Relations did not respond in time for publication.

Lauren Clark is a Reporter at KBOI Idaho News. Prior to joining the KBOI team, Lauren was an Arizona Campus Correspondent for Campus Reform.