It's over: University settles First Amendment lawsuit with professor after seven years 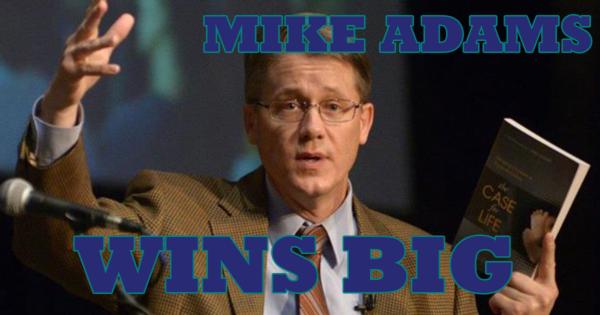 It’s been seven years since Mike Adams sued the University of North Carolina-Wilmington (UNCW)—the school at which he’s employed as a criminology professor—after his vocal conservatism cost him a promotion. Yesterday, Adams and UNCW settled.

UNCW has agreed to comply with a court order and promote Adams to a full professor as well as pay him $50,000 in back pay, $615,000 in attorneys’ fees, and adopt additional procedures to protect Adams from renewed retaliation such as preventing pay increases or denying further promotions during reappointment processes.

"It’s time to put this case behind them and get back to the business of teaching students."

The school will also retract its appeal of a federal court’s March ruling which said that UNCW illegally retaliated against Adam simply because of his conservative views.

“The important aspect is [the outcome of the case] reaffirms the basic principle of the First Amendment,” Alliance for Defending Freedom (ADF) Litigation Staff Counsel Travis Barham told Campus Reform. “Universities have to treat Christian and conservative professors fairly; otherwise there will be consequences.”

ADF has represented Adams since 2007 along with David French, who began the case with ADF and now litigates for the American Center for Law and Justice, according to a press release.

Now that an agreement has been reached, ADF and Adams can finally put an end to the case, Barham said during a phone interview.

“It’s time to put this case behind them and get back to the business of teaching students,” Barham said.

Adams isn’t the only professor ADF, a conservative Christian nonprofit organization, has represented over the past several years—although Barham did say that Adams’ case was the “most drastic” he has worked with.

“Other universities watching this should understand that disagreeing with an accomplished professor’s political and religious views is not an acceptable reason to deny him a promotion,” he said in the release.