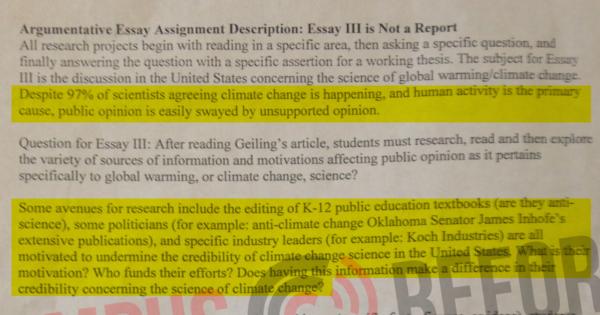 An English professor at Des Moines Area Community College (DMACC) has given his class an essay on the topic of climate change with a twist: students must argue that climate change deniers are propagating lies and undermining science.

"Just really adhere to what he tells you. That would be my best advice."

“Despite 97% of scientists agreeing climate change is happening, and human activity is the primary cause, public opinion is easily swayed by unsupported opinion,” the assignment states.

“Some avenues for research include the editing of K-12 public education textbooks (are they anti-science), some politicians (for example, anti-climate change Oklahoma Senator James Inhofe’s extensive publications), and specific industry leaders (for example: Koch Industries) are all motivated to undermine the credibility of climate change science in the United States.”

“What is their motivation?” the assignment asks. “Who funds their efforts? 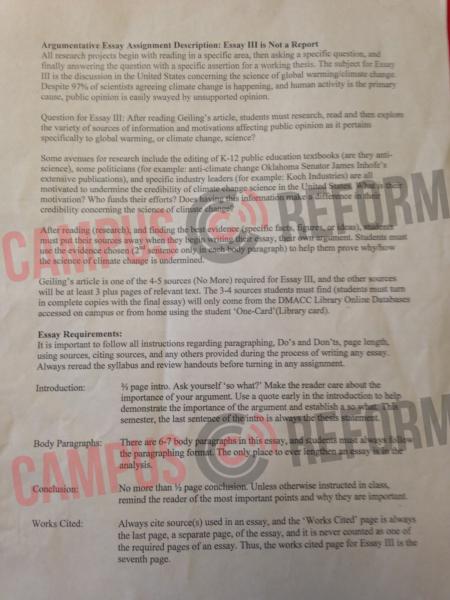 Betsy DeFord, a nursing student at DMACC, brought the assignment to Campus Reform after being required to argue a position with which she vehemently disagrees.

“I shouldn’t have to be writing the professor’s argument on [global warming],” DeFord told Campus Reform. “If two sides were presented, I wouldn’t have an issue with it.”

Students were required to use evidence from a Smithsonian Magazine article that claims “if politicians and strategists created the climate change ‘debate,’ the mainstream media has done its part in propagating it,” and condemns CNN for its “sin” of “[f]eaturing climate scientists and climate deniers in such a way that furthers the misconception that the debate is, in fact, still alive and well.”

The Smithsonian Magazine article that was the foundation for the essay was also highly politicized as it claimed that “[t]he right-leaning Fox News provided misinformation on climate change in 72 percent of its reporting on the issue.”

Pagnac also specified which types of sources students were allowed to use, and said that they could only be from the DMACC library, the majority of which are progressive in nature.

“He limited our sources that we were able to cite,” DeFord said. “Basically all of them were liberal viewpoints on global warming, pertaining the global warming agenda.”

Because of her concern for the growing partisanship in her classroom, DeFord recorded both her professor and the Dean to expose the situation.

DeFord asked to place a disclaimer on top of her paper to clarify that the argument does not reflect her views, but that was not accepted as a solution.

“Just really adhere to what he tells you,” Hensen said. “That would be my best advice.”

According to DeFord, Pagnac frequently discussed political issues like the relativism of religion, members of the “one-percent” paying off the national debt, and the Koch brothers.

DeFord claims that her professor said “the Koch brothers were king-makers, so basically if you want to win an office position as a conservative, then you need to get the Koch brothers to fund you.”

“He had used class time to basically lecture his own political agenda,” DeFord stated.

"I think too much class time was devoted to lecture on topics unrelated to writing."

In an email to Campus Reform Professor Pagnac clarified that "all assignments are academic exercises."

"[W]e regularly have students explore a variety of topics from a variety of directions, but the primary purpose of all assignments in any composition course concerns the writing."

A spokesperson for DMACC declined to comment for this story.