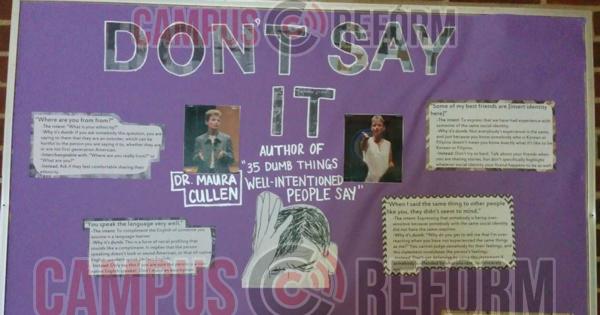 A poster hanging at the University of Illinois Urbana-Champaign’s Illinois Street Residence Halls wants to deter “well-intentioned” students from directing “dumb” and offensive questions to people of ethnic or diverse backgrounds.

The poster, which references 35 Dumb Things Well-Intentioned People Say: Surprising Things We Say That Widen the Diversity Gap by Dr. Maura Cullen, a speaker on diversity, discourages phrases such as “[i]f you’re going to live in this country, learn to speak the language!”, “[s]ome of my best friends are [insert identity here]”, and “[w]here are you from from?”

“If you ask somebody [where they are from], you are saying to them, that you are an outsider, which can be hurtful to the person you are saying it to, whether they are or are not first generation American,” the poster says. Instead, it suggests asking someone if they “feel comfortable sharing their ethnicity.”

Additionally, the poster frowns on saying “[y]ou speak the language very well,” and suggests that saying so is “a form of racial profiling that sounds like a compliment.”

“It implies that the person speaking doesn’t look or sound American, or that all native English speakers speak perfect English,” the poster says.

Other sayings the poster argues against include “[w]hen I said the same thing to other people like you, they didn’t seem to mind,” “[p]eople with disabilities are so courageous,” and “I don’t see color. I’m color-blind.” 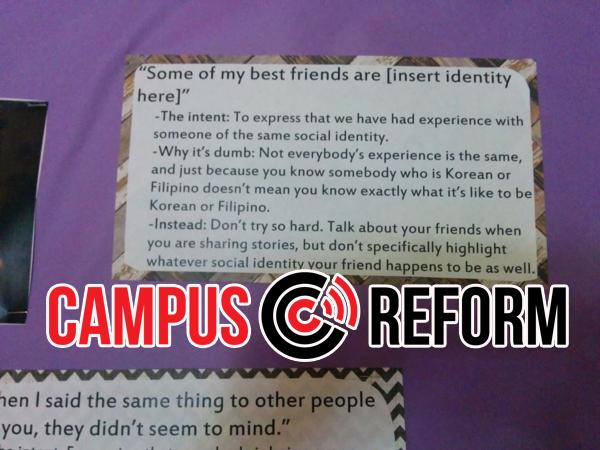 Andrew Lei, a member of the campus chapter of Young Americans for Liberty (YAL), found the poster and says it isn’t the first time he has seen such views on the residence hall bulletin boards.

“The university itself I do not believe has a specific agenda,” Lei told Campus Reform. “A way to test would be to try and get a bulletin board with an opposing view approved, I suppose. My guess, however, is that liberal students are more likely to utilize the boards.”

Lei says that there was a similar bulletin board last year that discussed income inequality. 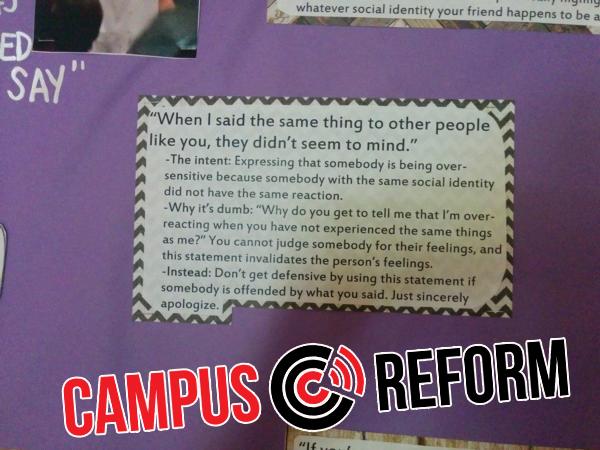 Campus Reform reached out for comment to the university’s media relations department multiple times but received no response. However, the housing administration said it was not aware of the poster and told Campus Reform that anything posted in the university housing facilities must undergo a thorough approval process. Standards require that the material is “inclusive, non-discriminatory to any student on campus.”