College abandons traditional applications, transcripts and test scores are ‘all about privilege and wealth’ 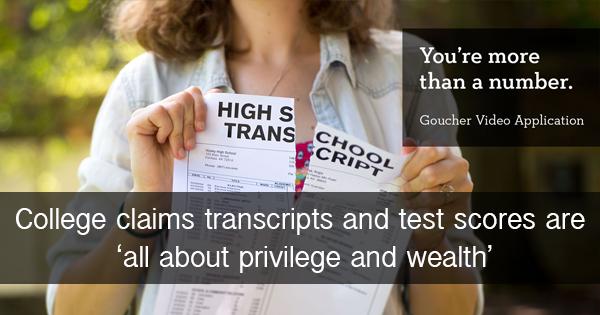 A liberal arts college in Maryland is forgoing the traditional application process as it is “all about privilege and wealth.”

According to José A. Bowen, president of Goucher College, college acceptance is no longer based on merit or academic success in high school. Beginning next year, Goucher will become the first college in the nation to offer students the opportunity to simply submit a two-minute video as the main part of the application process, which will still require the same monetary fee as the traditional application.

"For most Americans, applying to college is a giant mystery. The whole system is broken. Nobody thinks this is a good thing. It’s very high-stress. It’s all about privilege and wealth."

“Access to higher education should be about potential and not just previous achievement,” Bowen said in a press release.

In their admissions videos, students will explain in two minutes how they will thrive and fit in at Goucher. Students will submit videos through the newly created Goucher Video App (GVA) and will still be required to sign a statement of academic integrity, submit two works (one of which must be a graded assignment) from high school, and pay a $55 application fee.

“There is an inherent risk admitting students without seeing prior high school course history,” Christopher Wild, an admissions counselor at Goucher told Campus Reform. “However, the GVA does include a graded writing sample...and additional work from the high school.”

Wild also said that as Goucher classes are different from high school classes—Goucher classes apparently require students to “analyze” whereas high school simply tests how well students can “regurgitate content”—the graded writing sample will be enough to determine a student’s preparedness for the school.

“With the graded writing sample, we will be able to determine a student’s preparedness for a Goucher classroom,” Wild said.

The Common Application process, which allows students submit high school transcripts and letters of recommendation from advisors and teachers, is still an option. That application fee is also $55.

However, Bowen says that sometimes the Common Application process can be too confusing or discouraging.

“For most Americans, applying to college is a giant mystery,” Bowen told The Washington Post. “The whole system is broken. Nobody thinks this is a good thing. It’s very high-stress. It’s all about privilege and wealth. I’m convinced we are leaving talent on the table in this country because the process is so complicated and stressful. I want to level the playing field.”

According to the college, Goucher has been “test-optional” since 2007, meaning applying students were not required to submit either SAT or ACT scores.

Students applying to Goucher via video are still eligible for need-based financial aid. Students who wish to be considered for merit scholarships will still need to submit a high school transcript with the option of submitting SAT or ACT test scores.

Video applications will be judged on the “thoughtfulness of the student’s response,” the press release states. Wild confirmed to Campus Reform that the new application will not affect staffing, but will be a “new process” for Goucher staff to learn.