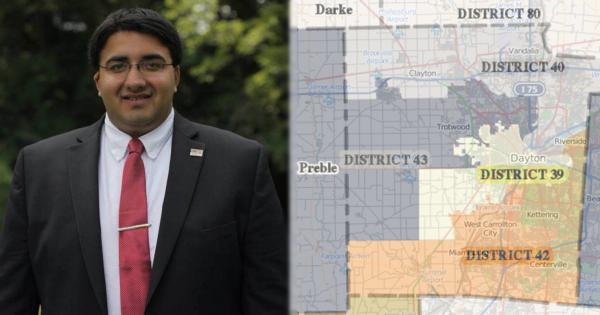 At 23 years, Niraj Antani is just two years shy of being eligible to run for Congress.

Despite the Constitution’s age restrictions, he has vowed to defend the principles of that document if he is elected to represent Ohioans in the 42nd district of Ohio’s House of Representatives.

"I wasn’t raised a Republican because my family wasn’t necessarily political so I had to figure out whether I was a Republican or Democrat myself."

In July, Antani was tapped by friends and former colleagues of Rep. Terry Blair, who held the seat for six years before his passing in June, to replace Blair on the ballot.

“When Terry passed away it was quite unexpected and they approached me and asked me to run,” Antani told Campus Reform. “There was a group of us that had lunch every Saturday and [Terry] was one of them. His backers became my supporters, some of which knew him for 20 years.”

To become the Republican candidate, Antani had to defeat five other contenders including establishment candidate Tom Young, according to the Dayton Daily News.

“I obviously have big shoes to fill,” said Antani, who described the initial five-way race as “very intense, but it obviously worked out.”

The former Capitol Hill intern and senior-year law student at the University of Dayton is now up against Democratic candidate Patrick Merris, who’s nearly 40 years older. Merris is a veteran of both the U.S. Navy and Army and began serving on his local city council in January 2014.

According to Antani, Merris has often pointed to Antani’s age as an indicator of limited experience and wisdom. Antani says that couldn’t be further from the truth.

“[Merris] has been on [city] council all of eight months whereas I’ve had seven or eight years of political experience,” said Antani. “People don’t want just another politician, they want someone who’s going to go into state government and practice the will of the people and work for them and that has really been my response.”

Antani claims that, if anything, his youthfulness gives him an edge in the race. Using education as an example, he says that legislatures need to “look like the people they serve.”

“I think that fresh ideas, new blood and more enthusiasm in politics [are] always good. We have a bunch of people in D.C. and in state capitals throughout the country making education policy that did not grow up with technology and don’t understand the impact of that technology,” said Antani.

As the son of two Indian immigrants and a family of engineers and doctors, Antani is an unusual candidate. In 1978, his parents immigrated to the U.S. with little and Antani quickly learned to value their hard work and personal responsibility.

The former Chairman of the Ohio Republican Party Asian Pacific American Advisory Council said he came to the eventual conclusion that “conservatism is what advances opportunity and liberalism is not.”

“I wasn’t raised a Republican because my family wasn’t necessarily political so I had to figure out whether I was a Republican or Democrat myself,” Antani said.

Antani believes that continued implementation of conservative economic policies, such as friendly tax and regulatory structures and expanding Ohio’s population of skilled workers, will ensure that “every Ohioan has the opportunity to reach their American Dream.”

According to Antani, the decline in the proportion of Americans who go on to attend college after high school has created a gradual deficit of skilled workers in his state.

“The job creators are being taken care of, they’re happy with the way [Ohio’s state] government is cutting taxes and reducing regulations, but what they’re not happy with is that they don’t have a strong group of skilled workers from which they can employ,” said Antani.

Antani also believes Ohio’s shale oil industry is a resource that should be used to benefit the state’s economy.

“I think that if we can produce low-cost energy here in the U.S., better yet in our own backyard in Ohio, we should do everything in our power to do so,” said Antani.

Since he first began working in politics for Republican presidential nominee John McCain in 2008, Antani has maintained the belief that what you put in is what you get out.

“If you’re going to do this, you have to be in it to win it and prepared to never take no for an answer,” said Antani. He added “if you go through life and listen every time someone says no to you, you’re not going to be doing a lot.”

Antani feels it’s his duty to be in politics “because it is [Millennials] that [are] going to be stuck with $13 trillion in debt and who [are] graduating from colleges [and] high school without jobs.”

Win or lose come Nov. 4, this 23-year-old says he will remain confident in his skin and proud of all that he’s already accomplished.

“When I started running for this there were a ton of people who said you need to wait your turn, you’re too young, etc., but obviously I kept on and I was successful. I will be successful” said Antani.