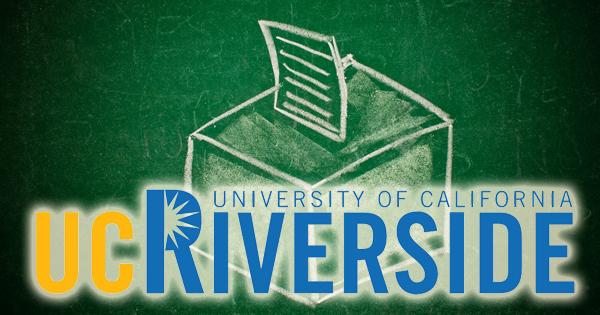 The University of California, Riverside is offering students course credit to register voters in support of pro-union candidates through labor activism internships.

In a campus-wide email, Ellen Reese, the chair of UC-Riverside’s Labor Studies Program and sociology professor, calls for “upper division students who are in good standing” to apply for local union and workers centers.

According to the email obtained by Campus Reform, the internships serve “[t]o enrich students' understanding of the issues facing working class people and the labor movement, the program offers internships with local labor and community organizations.”

“In addition to phone banking, volunteers might get involved in mobilizing and registering voters for the fall election in support of pro-union candidates, and in support of ballot propositions regarding the state budget,” the description for the United Domestic Workers internship states.

Students may receive one to four course credits for the internship, depending on the amount of hours dedicated per week.

According to Kris Lovekin, director of media relations for UC-Riverside, the internship opportunities were on the emailed list by request. Lovekin told Campus Reform that the school is “open to suggestions” for any other community organizations, including conservative options.

“Internships allow students are able [sic] to work alongside professionals who are in the field that the students themselves find interesting,” Lovekin said in an email to Campus Reform. “They learn the realities on the ground, what kind of hours people work, what amount of conflict is typical in a day, what pay levels are typical.”

The email was sent from the address of Ryan Mariano, administrative and event assistant for the multidisciplinary financial and administrative unit at UC-Riverside—a public university. It touts the internships as serving the working class of “low to moderate income” and those who are “in support of ballot propositions regarding the state budget.”

The email encourages students to speak to Reese, who confirmed to Campus Reform that the email was sent to all students, during her office hours for information on internship opportunities.

According to the university’s website, labor studies is an interdisciplinary minor “that focuses on the conditions, activities, and struggles of workers and other members of the working class from an international, contemporary, comparative and historical perspective.”

The minor is designed to prepare UC-Riverside students for careers in community organizing, labor law, or regulatory agencies.

Suggested organizations include: the Warehouse Worker Resource Center, which employs temporary workers and Latino immigrants; United Food and Commercial Workers, which organizes grocery workers subjected to “highly exploitative conditions;” and United Domestic workers, where students will have the opportunity to “mobilize and register voters in support of pro-union candidates.”

Other advocacy organizations and non-profits, such as Habitat for Humanity, are also included as internship options for students.

Fluency in the Spanish language is among the suggested skill sets for some of the internships.

Other UC-System schools also offer labor activism programs and internships such as UC-Berkeley and UCLA.