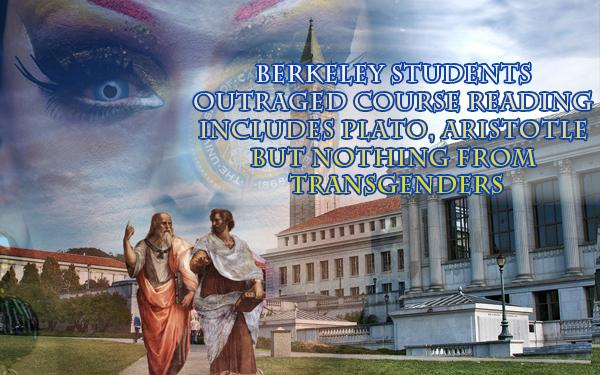 Two students at the University of California, Berkeley are calling for students to “Occupy the syllabus,” or consider dropping a course if it only includes the works of white men as class material.

Students Rodrigo Kazuo and Margaret “Meg” Perret wrote an op-ed in The Daily Californian, the independent student newspaper, titled “Occupy the syllabus” where they called for a student-wide occupation of all social science and humanities classes after they found their upper-division course on classical social theory lacked the works of women, trans people, and people of color.

“The white male canon is not sufficient for theorizing the lives of marginalized people.”

“The course syllabus employed a standardized canon of theory that began with Plato and Aristotle, then jumped to modern philosophers: Hobbes, Locke, Hegel, Marx, Weber and Foucault, all of whom are white men,” wrote the students. “The syllabus did not include a single woman or person of color.”

The students espoused their concerns surrounding the white male dominated material and suggest that simply assigning these authors without the inclusion of minority thought is not acknowledging “the other 99 percent of humanity.”

“These courses pretend that a minuscule fraction of humanity — economically privileged white males from five imperial countries (England, France, Germany, Italy and the United States) — are the only people to produce valid knowledge about the world,” wrote the students.

“The white male canon is not sufficient for theorizing the lives of marginalized people. None of the thinkers we studied in this course had a robust analysis of gender or racial oppression,” continued the students. “They did not even engage with the enduring legacies of European colonial expansion, the enslavement of black people and the genocide of indigenous people in the Americas.”

The students were dissatisfied that there was no mention of gender or racial oppression, nor did the class feature a single Asian author. They also condemned recognition of patriarchal material with no feminist alternative and no mention of Ferguson, Missouri.

“[T]he classroom environment felt so hostile to women, people of color, queer folks and other marginalized subjects that it was difficult for us to focus on the course material.” wrote the students. “Sometimes, we were so uncomfortable that we had to leave the classroom in the middle of lecture.”

The students referenced an incident in the classroom where the professor was discussing how men and women are distinct from one another because women have the ability to give birth while men do not. The discussion is said to have turned highly offensive when the professor made no mention of trans people. When one student asked where trans fit into the lesson, the students claim the professor dismissed them as the “exception” to the lesson, which they deemed “unacceptable.”

“In the 2013 campus climate survey, 26 percent of respondents reported that they had personally experienced exclusionary, intimidating, offensive and/or hostile conduct,” writes the students. “The survey also found that marginalized students, such as trans* and black students, had experienced exclusionary conduct at rates much higher than average.”

The student authors argue for the restructuring of how social theory classes are taught and want classroom instructors to attend workshops on inclusivity (such workshops are offered at the Gender Equity Resource Center where Perret interns).

“[I]f you have taken classes in the social sciences and humanities, we challenge you: Count the readings authored by white males and those authored by the majority of humanity,” wrote the students. “Then ask yourself: Are your identities and the identities of people you love reflected on these syllabi? Whose perspectives and life experiences are excluded? Is it really worth it to accumulate debt for such an epistemically poor education?”

Perret is a Gender and Women’s Studies major and lists her interests as critical animal studies, queer theory, and feminist studies of science and technology. Kazuo is a member of several research groups in computer science and social science.

UPDATE: When Campus Reform asked the students if they would drop a course that didn’t comply with the standards they present with their article,  Perret responded, “I’ve dropped classes because of their inadequate treatment of feminist and other critical perspectives. In fact, I dropped a class about sexual politics this semester because the syllabus was majority white men.”