Kaitlyn Schallhorn and Caleb Bonham Reporter at Fox News @K_Schallhorn on Mar 03, 2015 at 9:54 AM EDT 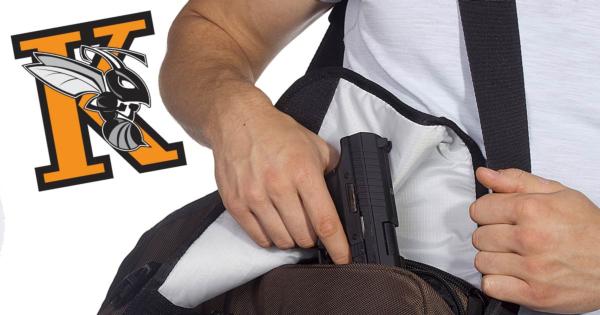 A student at Kalamazoo College has been attacked and labeled “homophobic” and "racist" by student government representatives because he wanted to facilitate a discussion about campus carry.

In an audio recording exclusively obtained by Campus Reform, students at a Student Commission meeting—K-College’s student government—interrupted Alexander Ross, a sophomore political science major, as he requested that the students engage in a conversation about campus carry, a request he had been asking the Commission for five straight weeks.

“I will not advocate for you to get a gun to shoot me because you feel scared in the middle of the night when you see me in my black hoodie.”

During the public comment portion of the meeting, Ross addressed the Commission's refusal to discuss issues outside of its ideology. Despite being interrupted several times, Ross encouraged the Commission to stop automatically saying “no” to students’ requests and be more open to other viewpoints.

"I've been here for five weeks and I've talked to two of you" Ross told the Commission, which according to its website, has over 23 commissioners.

"Sorry, I'm gonna have to interrupt you because you as a white male talking to me," protested an unidentified member of the Commission midway through Ross's remarks.

"Seek out people who think differently than you instead of shutting them down as wrong," Ross responded. "It's extremely childish to call me names," he said, but the name calling had just begun.

After his allotted time expired, Ross and his pro-Second Amendment advocacy, were berated by the Kalamazoo student government.

Another student commissioner at K-College, said Ross was “disrespecting” people on the Commission as he was “talking to [another student] like that as a person of color when you’re coming from a white male privilege stance in life.”

“And what’s interesting right now is that you actually can’t respond to me because your time is up,” a student identified as Vice President of the Commission Rian Brown said at the meeting. “And I know that’s going to be hard for you because you come from a place of such privilege that you felt it was okay to disrespect people of color in this room.”

Members accused Ross of "racism," "homophobia," and "sexism," and some even went so far as to accuse Ross's pro-Second Amendment position of desiring to kill students in black hoodies.

“I’m going to be honest with you, Alex. I never advocated for you. I never would have,” Brown said. “I would never represent you because, I couldn’t because, you directly conflict with my life. Period."

“For anyone on this Commission to represent you would be to represent racism, sexism, homophobia,” Brown said. “And clearly you just spent two hours of your time listening that this body would like to be an anti-racist institution. So what you seek should not come from here. At least not this body with these people.”

“There will be no resolution written for your racism,” she continued. “It won’t happen. No one will support you. If you want to do this, whatever you call yourself, disrespecting, burning bridges, having no reason to create open dialogue, you’re going to continue to be the lone ranger, who from my perspective is threatened by black and brown people. So no. I will not advocate for you to get a gun to shoot me because you feel scared in the middle of the night when you see me in my black hoodie. I will not. I would not.”

According to MLive, Brown, a junior, resigned from her position later in the week and started a #UnsafeatK Twitter campaign, claiming that the private liberal arts school doesn’t do enough to protect minority students on the Michigan campus who feel threatened.

The right to bear concealed weapons is MORALLY wrong esp. on a COLLEGE CAMPUS. Why is that hard to understand? #unsafeatK

As @kcollege alumna who remembers Oct 1999: ALL students must feel safe on campus. Racism, violence, GUNS have no place. #unsafeatK

By a white male carrying a gun holster? What's up with that @kcollege #UnsafeAtK

Brown accused Ross of “flashing a holster” and threatening students. Ross told Campus Reform that he subsequently had his dorm room and car searched by security.

“Like, understand the violence that occurs against our bodies when we have to hear our peers say things like ‘he wants to hold guns on campus,'” Brown said during Monday’s meeting. “Understand the triggering that that means for, like, students of color that have to sit at this table and hold a straight face, to hear that.”

Besides allegedly feeling threatened by Ross’s pro-Second Amendment stance, Brown said “black and brown bodies” at K-College feel marginalized and unsafe at the school as their request for an intercultural center on campus has been denied, according to MLive.

Ross told Campus Reform that he had been deemed a racist by his peers in the past because of his support of allowing those with appropriate permits to conceal carry on campus, but never to this extent.

“I don’t know why they’re calling me racist, or a sexist, or a homophobe because none of those things have anything to deal with what I’m asking them to do,” he told Campus Reform, adding that his peers’ behavior at the meeting was “childish.”

K-College hosted a meeting Wednesday night about minority student safety that drew more than 100 people. According to MLive, the meeting, which lasted more than one hour, was closed to the media.

Update: Previously, this article misidentified a student commissioner. The article has been updated.