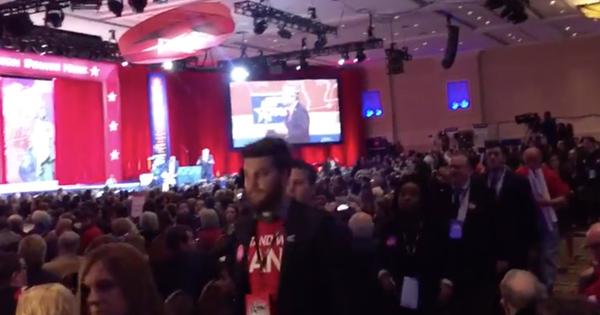 Conference-goers, including a large number of Millennials, staged a walkout during the middle of the former Florida governor’s speech. Around a few dozen participants rose to follow an attendee dressed as Thomas Jefferson hoisting an oversized Gadsden flag out of the grand ballroom where speakers such as Sen. Rand Paul, R-Ky., Wisconsin Gov. Scott Walker, and former Vice Presidential candidate Sarah Palin have galvanized crowds of right-wingers since CPAC commenced Wednesday.

Mike Przybyl, who donned a red “Stand with Rand” t-shirt for the day, participated in the walkout himself and encouraged others to join him. According to Przybyl, a junior at the University of North Carolina at Charlotte, the walkout was intended to highlight the growing division between establishment Republicans and Tea Party candidates.

“Another Bush is not the correct answer for the country and I think a lot of people even within our own party think that,” Przybyl told Campus Reform.

“He has to show in which ways—if any—he’s different than his brother and father because people, especially in his own party, are going to associate him with the policies of his brother and his father,” the political science and history major said.

University of Alabama alumna Crissy Brown said Bush’s foreign policy and support of providing in-state tuition and valid driver’s licenses to illegal immigrants is one reason she will support Sen. Rand Paul, should he announce a presidential run.

“I think the overall reason that students wanted to get together and make this protest and demonstration happen is because we’re sort of sick of the status quo and wanted to let people know that young people, we’re done with the failed policies that have proven not to work,” Brown told Campus Reform.