You can't make fun of terrorists at the U. of Minnesota 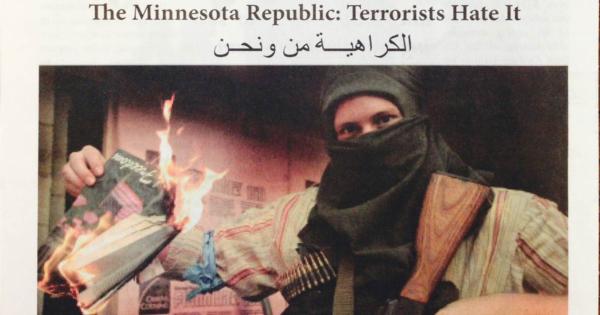 No student or student group at a public university should have to fight for their First Amendment rights. But as I’m preparing for graduation in a few short months, that’s exactly what I find myself doing—fighting for the rights of my student publication.

At the Minnesota Republic, we pride ourselves in standing up for freedom of speech on campus because we might not exist without it.

"In the future, close attention may be paid to the content published by Students for a Conservative Voice to ensure that any material that is produced with student fee funds does not compromise the cultural harmony of the campus."

Our publication, derived from the University of Minnesota’s Students for a Conservative Voice (SCV), allows students on campus to share their viewpoints no matter what—even if they are considered offensive.

And no other publication on campus can say that.

When Vice Provost of Student Affairs and Dean of Students Danita Young Brown apologized to students for a student group throwing a fiesta on the grounds that it might offend the Chicano and Latino students, we printed Goldy Gopher with a sombrero on the front cover. After the Charlie Hebdo attacks, we put a drawing of Muhammad on the cover, asking for speech over terror.

We do these things to show support for students’ right to say what they want on campus.

But the Student Service Fees Committee (SSFC) is now putting our rights in danger.

Every year student groups apply for funding from this committee, which is responsible for allocating millions of dollars. And while it’s a fight every year to secure the funding needed to print the Minnesota Republic, this year we were faced with a new challenge—the right to publish what we want.

Other than the protection afforded by the First Amendment to print such things, the SSFC even has its own rule that protects students’ rights to print content without hurting their request for funding.

And if the fees committee was following its own rules, a four-year-old newspaper cover would not have been questioned.

“While reviewing one of the sample publications, committee members came across material that demonstrated an overt lack of sensitivity to the portrayal of members of the Arab world,” SSFC’s funding recommendation to the Minnesota Republic said. “When pressed for information on how this piece made it into print, representatives informed the committee that, based on the date of this particular publication, the members responsible for that work are no longer in the organization and that this particular piece is not representative of the work produced by the organization today.”

“After assessing this information, the Student Service Fee Committee would like to emphasize for the group the significance of culturally sensitive discourse on a campus like the University of Minnesota, which prides itself on being home to a wide range of values and beliefs held by members that originate from countless cultures across the globe,” the recommendation continued. “In the future, close attention may be paid to the content published by Students for a Conservative Voice to ensure that any material that is produced with student fee funds does not compromise the cultural harmony of the campus and to ensure that the material that is produced is not at odds with the criteria in place for receiving this funding.”

I am shocked that not one person in the room during these deliberations questioned the committee’s flagrant disregard for our right to free speech as it was questioning whether or not our publication disrupts the “cultural harmony” on U of M’s campus.

It’s clear that their statement is meant to scare students on campus from publishing or saying anything that the committee might not like.

Students should be encouraged to share their views at a public university, not threatened when they do so.

The Minnesota Republic has dealt with all of this, while the U of M has stood by and allowed it to happen. Whether it is offensive speech or not, all speech on a public university campus should be protected.

Students on campus should not have to feel as though the university is spying on them, waiting for a chance to strip them of their First Amendment rights. Instead, students—especially on a public campus—should be undeterred in their discourse and dialogue on any issue.

Lauren Maass is a Multimedia Journalist at Gray TV's Washington Bureau. She is a former Minnesota Campus Correspondent for Campus Reform.