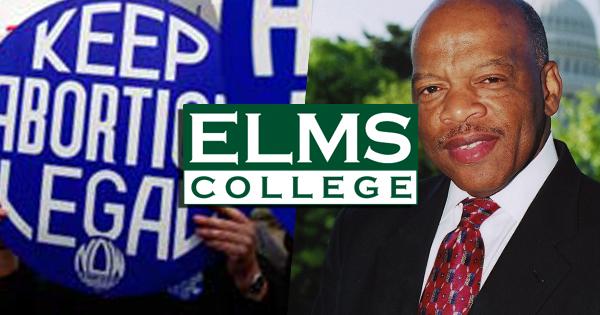 A Catholic college in Massachusetts has invited a pro-abortion congressman to deliver its commencement address to the Class of 2015.

"Our belief in the sanctity of human life and the inherent dignity of the human person is the foundation of all the principles of our social teaching."

“Lewis’ personal and political focus on civil rights fits perfectly with Elms’ commitment to social justice. As commencement speaker, he will deliver a humbling and inspiring message for the Class of 2015 to carry into the world,” Elms wrote in the original announcement.

Elms made no mention, however, of Lewis’s track record as a pro-abortion advocate during his 29-year tenure in the U.S. House of Representatives.

According to On The Issues, a non-profit organization tracking the voting records of political leaders, the Civil Rights icon who helped lead the march from Selma to Montgomery, Ala. in 1965 has earned a 100 percent approval rating from the National Abortion and Reproductive Rights Action League (NARAL) for his consistent opposition to measures that restrict or reduce access to abortion.

In May 2011, Lewis voted against legislation banning the use of federal funds for health insurance that covers abortion. He has previously voted against efforts to eliminate partial-birth abortions and human cloning for reproduction and medical research; make it a crime to harm a fetus during another crime; and restrict access to minors seeking an abortion.

Lewis also co-sponsored the Women’s Health Protection Act of 2013, which aimed to protect a “woman’s right to determine whether and when to bear a child or end a pregnancy by limiting restrictions on the provision of abortion services.” The bill was unsuccessfully introduced during the 113th Congress.

According to Elms’ website, the college boasts a commitment to seven key values “at the heart of Catholic social tradition.” The first value among those listed is the “Life and Dignity of the Human Person.”

“Our belief in the sanctity of human life and the inherent dignity of the human person is the foundation of all the principles of our social teaching,” states Elms, adding that “[in] our society, human life is under attack from abortion and assisted suicide.”

Elms College did not respond to Campus Reform’s repeated requests for comment in time for publication.