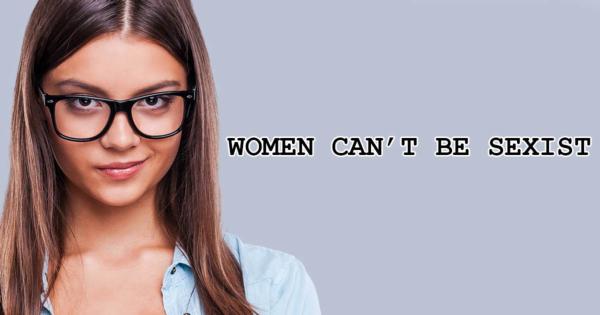 Women cannot be sexist, a journalism student at Ohio University argued in a recent editorial.

In a guest column for the Post, OU’s student publication, Erin Davoran, a junior, claimed that she was approached by a man—who she called a “menist”— while tabling for the school’s Women’s Center who engaged her in a conversation about an experience he had in which a woman was sexist towards him in a job interview. Despite the interviewer telling the man that “all white men created poverty,” Davoran said women cannot be sexist towards men.

“Women can be prejudiced against men. But just as #notallmen are sexist, not all women are anti-man,” she continued. “There are many different discourses of feminism, and the majority believe in the social, political and economic equality of the sexes.”

According to Davoran’s editorial, women cannot be sexist because that “describes a system of disadvantage based on race.” Citing the film Dear White People, she argued that in the same way, black people cannot be racist as black people “don't stand to benefit from such a system.”

Davoran also detailed the events of the day on her public Twitter account. In a series of tweets she said the man came back to her table to ask her why there is “ Women of Appalachia” art hanging in OU’s Multicultural Center, but there isn’t any “Men of Appalachia.”

According to her, she began to tell him that “[s]exism describes a system...women can’t be sexist,” before he cut her off and walked away.

The man allegedly told Davoran that he supports equity feminism, but not gender feminism.

“I can’t speak for...all other women and feminists, but I think most would agree when I say that I don’t hate men,” Davoran wrote. “I don’t even completely hate sexist, misogynistic ‘meninists’ like the one I encountered. I hate sexism and prejudice and want to have honest conversations with people, especially those who misunderstand the issues.”

The director of the Women’s Center did not respond to a request for comment from Campus Reform in time of publication.

A recent study from researchers at Northeastern University in Boston said that men who hold doors open for women and smile at women are “benevolent sexists” as they view women as “incompetent” and need men’s “cherished protection.”

The study claimed that men who hold doors open for women, call women “love” or “dear,” refuse to split a bill, offer women jackets in the cold, say good women should be put on a pedestal, or believe that men should make sacrifices to provide for women are all benevolent sexists.

Davoran did not respond to an emailed request for comment from Campus Reform.