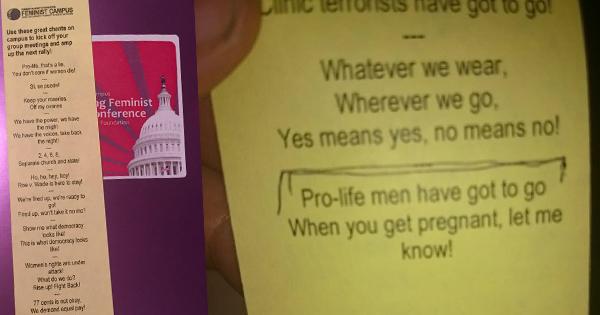 During the conference, hosted by the Feminist Majority Foundation, attendees could participate in a crash course on campus activism titled “Queering Your Campus.” According to NYFLC’s description of the workshop, students were taught how to organize on campus for gender-neutral restrooms and housing and foster “intersectional feminist activism.”

A flyer passed out during the workshop, and later obtained by Campus Reform, encouraged the young activists to “kick off [their] group meetings and amp up [their] next rally” using a variety of short chants including, but not limited to:

One of the proposed chants described individuals who oppose abortion as “clinic terrorists” and urged young women facing unexpected pregnancies to let young feminists on their campus know:

“Whatever we wear, Wherever we go, Yes means yes, no means no! Pro-life men have got to go. When you get pregnant, let me know!”

In addition to the list of chants, conference-goers could take home stickers proclaiming “I [love] my local abortion provider” and purchase miniature finger puppets of historical female figures including Rosa Parks, Marie Curie, and Sojourner Truth.

Other workshops offered to attendees included “Reinventing Rosie: Reframing the Workforce for Women,” “Sex-positivity: Educate, Empower, Self-Define,” and “Keep Your Religion Off Our Bodies.” Climate change was also addressed with one breakout session titled “Ecofeminism: Activism to Create Climate Justice.”