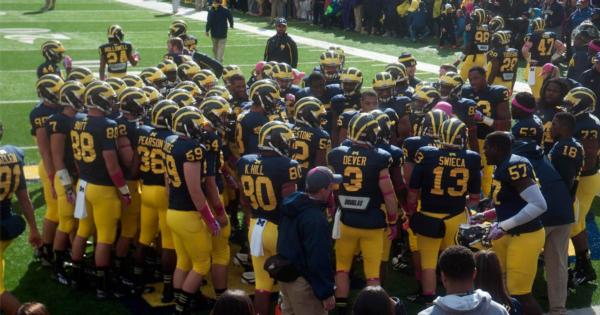 Football season is still months away, but already the University of Michigan’s coach Jim Harbaugh has his first victory—and it’s against the university.

After the Big Ten school came under fire for cancelling—and then rescheduling—a screening of “American Sniper,” Harbaugh tweeted that the Michigan football team would be watching the film.

Michigan Football will watch "American Sniper"! Proud of Chris Kyle & Proud to be an American & if that offends anybody then so be it!

As reported by the Michigan Daily, U-M’s student newspaper, the screening was initially cancelled after Middle Eastern and North Africa (MENA) and Muslim Students’ Association (MSA) students signed onto a letter to the Center for Campus Involvement that claimed the Clint Eastwood film was anti-Muslim

“Although we respect the right to freedom of speech, we believe that with this right comes responsibility: responsibility of action, intention, and outcome,” the letter read. “The movie ‘American Sniper’ not only tolerates but promotes anti-Muslim and anti-MENA rhetoric and sympathizes with a mass killer.”

The university eventually reversed its decision to cancel the film, and instead moved an alternate screening of Paddington, a comedy about a bear, to a different location.

“The initial decision to cancel the movie was not consistent with the high value the University of Michigan places on freedom of expression and our respect for the right of students to make their own choices in such matters,” the university said in a statement.