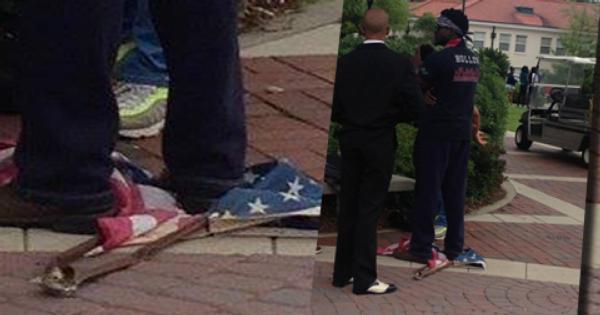 A United States veteran was briefly detained at Valdosta State University after she forcefully took an American flag from a group of African-American students desecrating Old Glory in protest of white supremacy.

“[We’re] raising awareness of black nationalism. Where we actually come from, miseducation of America, and the destruction and genocide of our people through that flag,” one African-American student can be heard saying in the video obtained by Campus Reform.

“If your cause is racism then find some white people and walk on them.”

“That’s all we want, people to know how y’all act,” he said.

According to the Valdosta Daily Times, the local newspaper, Air Force veteran Michelle Manhart was not charged by the university police but was detained after she took the flag from the students. She was issued a criminal trespass warning which bars her from campus in the future.

Manhart told the paper that she hoped for an apology letter from the group as well as the flag so that she may dispose of it properly.

“If your cause is racism then find some white people and walk on them,” Manhart told the Valdosta Daily Times. “But to walk on the flag is walking on our symbol of freedom. You have the freedom to do what you are doing because of it. I’m not fighting against them. I’m fighting against the way they are going about it.”

In a video posted to Manhart’s public Facebook page, several campus police officers wrangle the flag from her hands and place her in handcuffs. An African-American female student was also attempting to hold the flag, but she was not detained by officers.

“I swear to God, if this would have been in the hood, you’d of had me in handcuffs already,” one student shouted at campus police during the altercation with Manhart. “You would of had a n***r in some handcuffs by now if...Look at that white privilege.”

Manhart can be seen in the video resisting arrest while several onlookers shout obscenities.

When asked about affirmative action in a separate video obtained by Campus Reform, a VSU student said, “man, that’s some bullshit.”

In the video, the student got hostile with the female student asking questions about why they were outside with the flag.

“Don’t ask us why we’re out here trying to spread awareness for our people because that shit don’t even really involve y’all motherfuckers to be honest,” the student said.

According to the Valdosta Daily Times, university officials said the group was exercising their right to free speech and protest on campus.

“Due to our First Amendment they had the freedom to peacefully protest,” Colleen Kavanaugh, a sophomore at VSU told Campus Reform. “But being an American citizen and living on American soil, I think it’s extremely disrespectful to stand on an American flag. If they truly want to get their story across, they could and should have done it in a different way.”

“I don’t think I have enough words to express how I feel about this very sad act of protest,” Madison Trammmell, a VSU senior, said in a statement sent to Campus Reform. “Protest racism or whatever in any other way, but to disrespect our nation and the very symbol that gives you the opportunity to do what you’re doing...no.”

Trammell said she’s “disappointed” with VSU for allowing the protest as the school should have known the protest would cause a disruption at the school considering Valdosta is a military city. Georgia Military College is also located in Valdosta and the Moody Air Force Base is less than 15 miles away.

“We respect the rights of people to peacefully assemble and voice their opinions,” the Board of Regents said in a statement to the Valdosta Daily Times. “Our primary concern is the safety of our students, faculty and staff and our ability to carry out our responsibilities to all our students on campus. We are monitoring the situation.”

The protest was disbanded after the veteran was detained. The students, who in the video express their anger that campus police were present, refused to show identification to the officers.