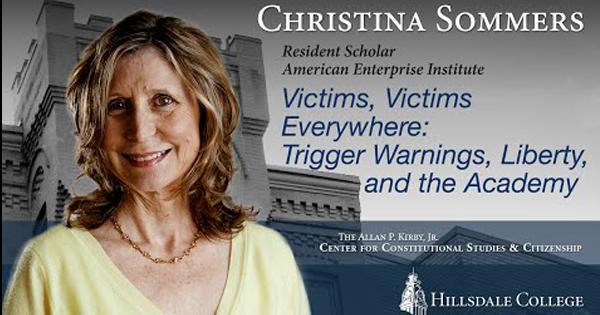 Christina Hoff Sommers, a noted feminist scholar, said last week that conservatives and libertarians are “defending freedom” on today’s college campuses in academic environment increasingly dominated by what she described as “grievance feminism.”

“I am convinced that the Millennial generation is going to have to do what previous generations have done. They are going to have to rise up and take back their democratic freedoms,” she said, adding that she views many of the activists who have promoted the concepts of “safe spaces,” microaggressions,” and “trigger warnings” as “crusading authoritarians.”

"I think this movement is not really about protecting vulnerable students. I think it is a way to assert power and control over others. It is a way of asserting your cause without having to offer evidence and argument."

Sommers spoke at the Allan P. Kirby Center for Constitutional Studies and Citizenship, which is located in Washington, D.C. and operated by Hillsdale College.

Thursday’s lunchtime discussion was titled “Victims, Victims Everywhere: Trigger Warnings, Liberty, and the Academy.” A Kirby Center Facebook post declared that the event was intended to explore development of “the contemporary fear of being offended and the accompanying mentality of victimhood.”

Sommers said that many modern students have come to regard a “grim feminist worldview as incontrovertible truth and most seem to be unaware that there is a reasonable, empirically based argument contrary to what they believe,” describing first and second wave feminism as “great American success stories” that “led, for the most part, to the liberation of women.”

Christina Hoff Sommers, Ph.D, is an author and former philosophy professor known for her critiques of contemporary feminism. Her books include Who Stole Feminism?, The War Against Boys, and Freedom Feminism: Its Surprising History and Why It Matters Today. She is a resident scholar at the American Enterprise Institute and hosts the “Factual Feminist,” a weekly video series in which she attempts to debunk “ false claims and erroneous statistics used to promote a misleading agenda.”

“I think this movement is not really about protecting vulnerable students. I think it is a way to assert power and control over others. It is a way of asserting your cause without having to offer evidence and argument” and to instead “shame people, intimidate them, and silence them,” Sommers said.

Sommers said that even liberal professors are “terrified” of some of these developments and they are “not used to challenging the politically correct Left.” She said that some of the professors she has talked to told her they were “scared they would say something that would make a student uncomfortable.”

This past April, activists created a “ safe space” and placed "trigger warnings" outside of one of Sommers's speaking engagements in a protest at Georgetown. Similarly, the atmosphere at Oberlin College was “ so hostile” that the campus police determined that there was a credible threat to her safety. According to Sommers, the campus police at both institutions provided the self-described “ equity feminist” with an escort to protect her safety during her visits.

“I am often criticized by hardline grievance feminists who believe that American women are a victim class and no amount of evidence can persuade them that they are wrong,” she said.

She said she has “never denied the reality of campus sexual assault... but I have questioned exaggerated statistics,” because she does not think that they help victims.

“Quite the contrary, it is because I take the crime of assault so seriously that I think we need serious research, sober statistics,” Sommers said, adding that “the more elite and expensive the school, the more likely it is a hotbed of trigger warnings, safe spaces, microaggression defense initiatives, and mock justice.”

Sommers said that the “rape culture” concept gained national prominence after an NPR and Center for Public Integrity report, which she characterized as misleading, led people to believe that college campuses are hotbeds of sexual violence. Combined with the response of the U.S. Department of Education, many of these activists became “empowered” while universities changed their policies in order to avoid risking federal investigation.

Katherine Helmick, a recent Hillsdale alumna who attended the event, was “really impressed” with Sommers and her “historical perspective on what the feminist movement used to be and how far it’s gone from its real goals.”