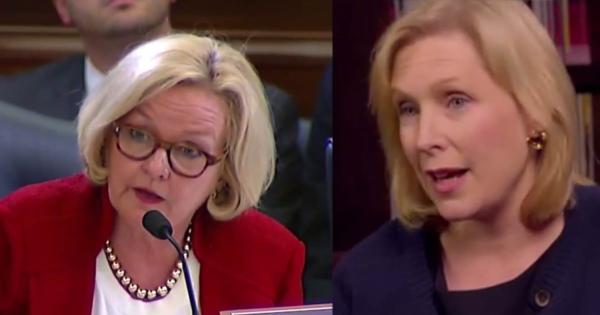 Sen. Claire McCaskill (D-Mo.) said that both the judicial and university systems should be involved in preventing sexual assault on campus. Different requirements apply for the separate systems, she said, because the severity of the consequences differ.

"I'm not saying that there has never been a false report but our problem in this area is not false reporting, it is underreporting."

“The worst that happens to somebody under Title IX is they get expelled. If you’re convicted of a forcible rape or sodomy, you are going to go to prison for a long time and be a sex offender for the rest of your life,” said McCaskill. She said that preponderance of evidence, a lower standard of evidence than the one used by the criminal justice system, is a “fair standard” for investigations by universities.

The event screened Campus Cover-up, a VICE documentary that premiered Friday on HBO which delves into the issue of campus sexual assault and cover-ups. Immediately afterwards, VICE correspondent Gianna Tobini interviewed McCaskill and Kirsten Gillibrand (D-NY), both of whom participated in the documentary.

Gillibrand said that the processes conducted by college administrators “can get a serial rapist off campus sooner than a trial could” and “if you do not have enough evidence, you might be able to do accommodations” for alleged sexual assault survivors.

“If I were a college president, I would certainly want tools to get a rapist off my campus. If I were to wait for the full legal process to run its course that could be two years, it could be three years,” said Gillibrand, adding that “rape is not a date gone badly, it is not a ‘he said/she said’ confusion, too much drinking” but is typically committed by a predator.

McCaskill and Gillibrand led a bipartisan effort earlier this year to reintroduce the Campus Accountability and Safety Act (CASA) in the Senate, while Rep. Carolyn Maloney (D-NY) has similarly reintroduced a House version of the bill.

According to an analysis published in the National Law Review, CASA would implement more stringent requirements for college campuses nationwide regarding sexual assault policies by requiring campus sexual assault climate surveys, mandate schools enter into a memorandum of understanding with local law enforcement, and demanding independent confidential advisors for alleged sexual assault survivors. Both bills, H.R. 1310 and S. 590, are pending.

"It's not that we want the scales to be tilted one way or another," McCaskill said. "We do want confidence in these systems and that's what this legislation really is designed about."

Laura Dunn, executive director of sexual violence advocacy group SurvJustice, was featured in Campus Cover-up. She told Campus Reform that SurvJustice endorsed the bill the first time it was introduced, but is not endorsing the current version due to “ a lot of flaws.”

“[The senators] mentioned confidential advisors. Unfortunately, schools have a conflict of interest. They can’t pretend they are on the side of the victim. They are not, they are on their own side and so we have some concerns about that and a few other provisions that we would like that changed so that we can support [the bill],” said Dunn.

Dunn said that CASA would extend constitutional protections beyond public schools to private schools. Currently, the processes at private schools are “dictated by private contracts between the student and the school.” She added that there is a “problem” with the “due process mention” regarding protections for both accused and the accuser as there is a movement to interpret this language to mean that sexual assault investigations require a “higher standard of evidence” than “preponderance of evidence.”

“You can have good due process and the preponderance of evidence. You don’t need a higher burden,” said Dunn.

Daniel Carter, board president of SurvJustice, said that a number of groups which had supported the 2013 Campus Sexual Violence Elimination Act have not endorsed CASA because of the “very serious technical concerns that we have.”

“For example, the way that they would count sexual assault statistics under the CASA bill could disenfranchise male victims of rape by no longer calling it rape, which the current regulations provide for,” said Carter.