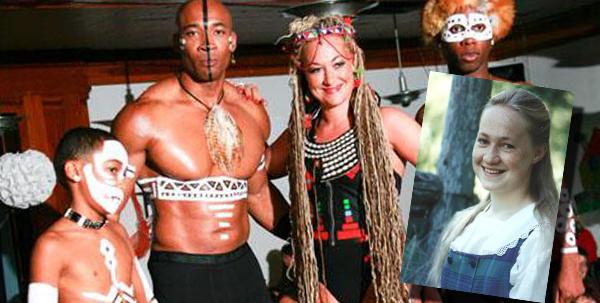 A professor at Eastern Washington University (EWU) has come under fire recently after family members said that she has been disguising herself as an African-American and is actually a white woman born in Montana.

Rachel Doležal, a Professor in the Africana Studies Program at EWU recently taught courses such as “The Black Woman’s Struggle” and “African American Culture” according to the school’s website.

"Some people live in a #DreamWorld and other people #FaceReality."

Revelations about Doležal’s racial heritage did not surface until her parents, Larry and Ruthanne Doležal, decided it was time to let the world know that their daughter’s life as a black woman was “simply not true.”

The parents provided a birth certificate and childhood photos before explaining how “Rachel has wanted to be somebody she's not. She's chosen not to just be herself but to represent herself as an African-American woman or a biracial person.”

Despite applying for a position on the Spokane police ombudsman commission as a black woman, and posting a false photo of her “father” to Facebook, Doležal’s real parents say she is actually of German and Czech descent.

Doležal is a prominent activist in the Spokane black community and is serving as President of the NAACP Chapter there. According to the group’s website, she is a licensed “diversity trainer” and “ethnic hair stylist” and has been the victim of “eight documented hate crimes.”

One recent “hate crime” committed against Doležal is under question after police determined that a racist letter sent to the NAACP P.O. Box in Spokane could only have been placed there by someone with access to the box’s key, or a post-office employee. Police say they have ruled out the possibility of a post-office employee being responsible for the letter.

In the past, Doležal has posted on her personal Twitter page things like “Some people live in a #DreamWorld and other people #FaceReality.”

Another tweet said “Am I the only person that had Jesus Christ listed on my birth certificate as the sole witness to my birth?”

Social media was abuzz on Friday with some users offering support to Doležal, saying it was okay for her to identify as another race, and that she was simply “transracial.”

One user said “Rachel Doležal is transracial and you should identify my sistah as what she identifies with.” Another user added that transracialism was a good thing because it helped “raise awareness for those living in the #wrongskin.”