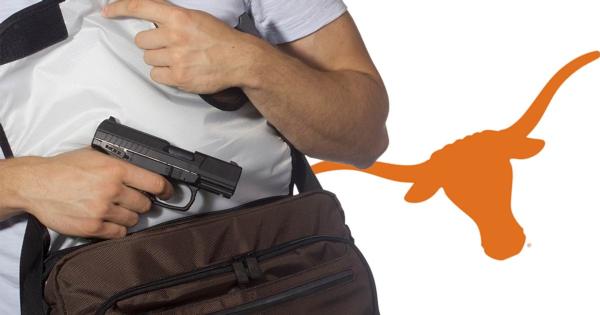 A professor at the University of Texas at Austin (UT) is concerned that a recently enacted law allowing concealed carry in university buildings will “shut down dissent and free speech,” according to an interview with The Trace on October 5.

The law, which was enacted in May, will allow students with concealed carry permits to bring firearms into classrooms.

"[W]e don’t want someone who will, when they’re uncomfortable, be able to shoot off a firearm."

Lisa Moore, an English professor whose courses cover “not exactly light topics” including “feminism, abortion, homosexuality, transgenderism, and birth control,” believes that having armed students in class will create an unsafe environment. And if students are unsafe, they will be unable to have “an honest conversation” about controversial issues.

“We oppose guns in our classrooms as a direct assault on our free speech rights,” claims Gun-Free UT, an organization co-founded by Moore to protest the recent legislation.

According to Moore, professors will “have to look at ruling out anything—any subject matter—that might seem provocative” because, “we don’t want someone who will, when they’re uncomfortable, be able to shoot off a firearm.”

Moore says some faculty members plan to give everyone an A to avoid “pissing someone off if they’re going to be armed.” Others are eliminating classroom discussion altogether because “they don’t want things to get heated.”

Moore, who teaches an early British literature course, thinks that firearms in the classroom will inhibit her ability to teach her students with the “skills to negotiate difficult issues” such as writing from the 14th and 15th centuries which tends to bring up “religious controversies.”

Concealed carry has been a reality on UT’s grounds for two decades, according to the university, though students were not allowed to bring the guns into campus buildings. Furthermore, Texas law includes restrictions which will still keep guns out of the hands of most students; licenses are restricted to persons over the age of 21 who have received training. The University of Texas estimates that fewer than 1 percent of students have concealed carry licenses.

While Moore has never seen a student bringing a gun to her class, she has “had some experiences that made [her] very grateful students weren’t allowed to carry guns on campus.” In her 20+ years at UT Austin, she has seen her office vandalized and at least one desk overturned.

One semester, she taught her class in an “undisclosed location, with an armed guard stationed nearby,” after a mentally ill student was removed from her class for disruptive behavior.

Moore has brought up the law in “all of [her] classes” and claims that students are scared “almost universally.”

Moore isn’t the only person at UT concerned about campus carry. UT Chancellor Adm. William McRaven has asked if having guns on campus “will somehow inhibit our freedom of speech.”