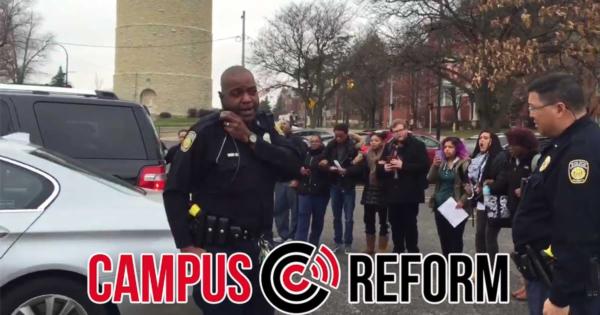 Members of the Black Student Union at Eastern Michigan University stormed the halls and classrooms of Pray Harrold Tuesday afternoon, promising the protests would not stop until their list of demands is met.

Participating students ran into classrooms shouting the same message and handing out flyers labelled “The Black Students 10-Point Plan” detailing their list of demands for the university to adopt.

One student, who wishes to remain anonymous, told Campus Reform she thought there was about to be a shooting in her classroom when the students disrupted her class, because of how loud and aggressive they were. Three black students left the class she was in to join the protest.

“The black students have been asking for these things for years and we are frustrated with the school’s administration,” one of the student protesters told Campus Reform. “These are not new demands; we tried to be peaceful, but our frustration has built up. We want to feel safe, and right now we don’t.”

On November 19, EMU held a forum about racism in higher education with Interim President Kim Schatzel. The Black Student Union gave Dr. Schatzel a list of demands, and said that they would continue to protest on campus until their demands are met. 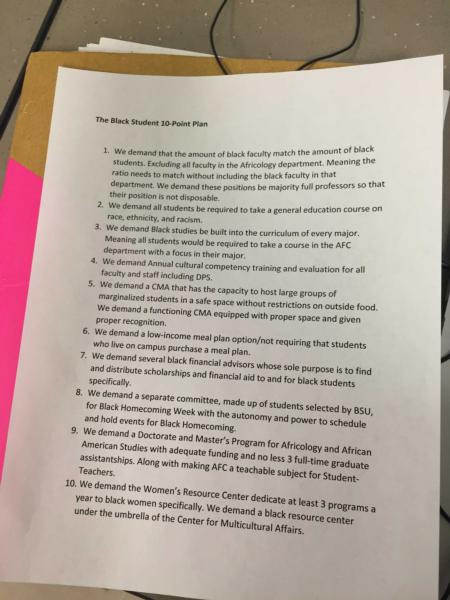 Over the weekend, Dr. Schatzel announced her resignation and her acceptance of a presidential position at Towson University in Maryland, which sparked today’s protest. After the protest, one student who had been leading the group said they would not stop until EMU adopts their 10-point plan.

After shouting in Pray-Harrold, which is comprised primarily of classrooms, the protesters walked across campus to Welch Hall, where an EMU board meeting was being held. The Board of Regents members holding the meeting were supposed to vote on whether or not they would continue their contract with the Education Achievement Authority of Michigan.

BSU members were there to protest the contract as well as to demand that their ten points be adopted by EMU. However, the board members announced they were postponing the vote, which angered the protesters.

When the meeting was over, EMU students and BSU followed two members of the board out to their cars to block them from leaving.

“Hey now! Hey now! We want freedom! Freedom! All these racist ass regents! We don’t need ‘em, need ‘em!” The BSU and other EMU students chanted while arranged in a half-circle, arms linked, blocking the vehicles of two members of the Board of Regents from leaving the parking lot.

After about 10 minutes of chanting, three police officers on the scene were joined by 12 other Ypsilanti Police Officers.

About 25 minutes after the chanting had begun, police officers escorted the two board members out of their vehicles to police cars and took them to an undisclosed location.

The leader of the group, who would not release his name to Campus Reform, said he felt they won the feud even though they didn’t win the vote because they made the board members fearful.

“Eastern Michigan University supports the right of students to speak out on issues of concern to them, and that's a strength of the university,” Geoff Larcom, Executive Director of Media Relations at EMU, told Campus Reform.