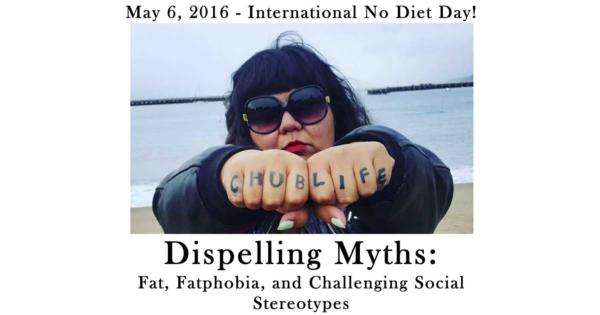 The event, held on International No Diet Day (May 6), was sponsored in part by the university’s School of Public Health and its Office for Equity and Diversity.

"Weight loss is not a realistic goal for most people."

“Fat activism” puts overweight individuals into a category with other groups of people who claim to be oppressed. It puts the blame of being fat on society as a whole instead of the individual.

Tovar, who gave her talk through Skype, told the small crowd in attendance that negative body perceptions are taught through societal mechanisms, and that overweight people cannot lose the extra fat.

“Weight loss is not a realistic goal for most people,” Tovar said.

She claimed 80 to 90 percent of people will regain the weight that they lose while on a diet and that it is important for people to realize that “the body you have now is the only body you will ever have.”

Tovar said diet culture is a tool of “white heteronormative society” and declared that “exercise and diets are constructs.” Society, she said, is fat phobic and that “Fat phobia is a form of bigotry, is a form of discrimination.”

At no point did Tovar address deaths caused by heart failure or diabetes. Tovar also failed to mention the fast food industry, instead decrying diet industries and doctors who she does not think are qualified to speak about health.

A flier for the event listed the complete list of sponsors as including the University of Minnesota’s School of Public Health; its Office of Equity and Diversity and the Women’s Center contained within; the university’s School of Social Work; its College of Food, Agriculture and Natural Resources; and its Improving Campus Climate initiative.

This article was originally published in The Minnesota Republic, a conservative student newspaper affiliated with the Leadership Institute’s Campus Leadership Program. Its articles are republished here with permission.