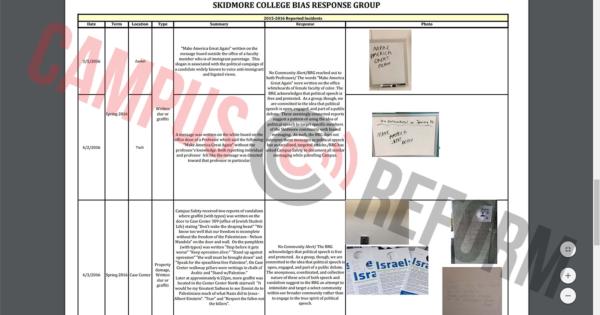 Three white board messages with the phrase “Make America Great Again” were included in the BRG’s annual report and classified as “written slur[s] or graffiti” because they had been written on the white boards of female faculty of color.

The report states that the slogan “is associated with the political campaign of a candidate widely known to voice anti-immigrant and bigoted views.” As such, the BRG did not consider the messages to be “political speech,” but rather a “racialized, targeted attack.”

The BRG also considered the messages to be connected with the “Chalkening” campaign that took place across college campuses this spring, during which students took to social media to share their chalking of Donald Trump’s slogans, sparking a backlash from “triggered” students at Emory University and elsewhere.

[RELATED: Emory president responds to chalk incident with chalking of his own]

The annual report at Skidmore also listed other alleged biased incidents, including an offensive Halloween costume and a racially insensitive poster.

A student reported that another student chose to dress as a religious Jew for Halloween. His costume included a “long black coat, a black hat, a fake beard, and peas (the hair that religious Jewish men do not cut).” The BRG did not respond to this incident, but indicated that it would devise an informational poster or booklet before next Halloween.

The women’s field hockey team was also reported to the BRG and forced to attend sensitivity training because they posted a racially insensitive game advertisement.

The report describes the ad, saying, “This particular poster features a young woman who appears to be white, and the caption reads, ‘Vamos a la Wagner Park this Thursday, October 15th at 3:30 to watch this senorita own the field against St. Lawrence!”

In the photo, the woman is wearing a sombrero, a thin black mustache, and a shirt that reads, “Maggie’s Landscaping Crew.” 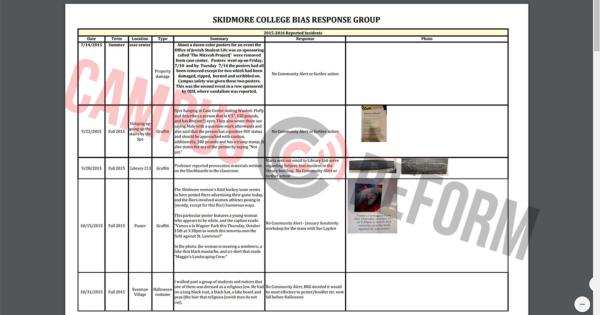 According to the report, the team posted many humorous fliers, “except for this flier.”

Skidmore’s Bias Response Group has annual reports dating back to 2008-2009. The BRG says it holds an “educational role” at the university, and their job is to “foster a climate of inclusion, civility, and mutual respect throughout the Skidmore community.”

Campus Reform reached out to Skidmore for comment, and is currently awaiting the school's response.