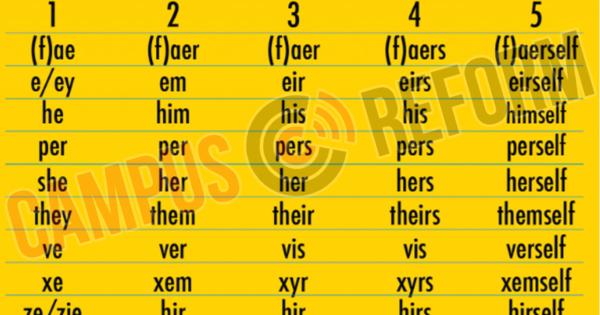 The University of Wisconsin-Milwaukee is offering a how-to guide for students to help them use the appropriate pronouns when referring to other students and professors.

A chart on the Lesbian, Gay, Bisexual, Transgender Resource Center’s (LGBTRC) website lists twelve appropriate pronouns to use, including fae, ae, e, ey, per, ve, xe, ze, and zie, in addition to the traditional he, she, and they, which can be used singularly or plurally. The chart also lists the possessive and reflexive variations of each pronoun.

However, the chart is “not an exhaustive list” of all preferred pronouns, according to the page’s FAQ. It stresses that some students prefer using their name as a pronoun, while others use the plural “they” to refer to themselves singularly.

According to the LGBTRC, using the correct personal gender pronoun, or PGP, is an important part of respecting others’ gender identities.

“It is a privilege to not have to worry about which pronoun someone is going to use for you,” the website says. “If you have this privilege, yet fail to respect someone else’s gender identity, it is not only disrespectful and hurtful, but also oppressive.”

The Center also offers suggestions for students who make a mistake when referring to someone with the wrong gender pronoun. If a student accidentally “mis-gender[s]” another student, that student should apologize in private and “move on” from the situation.

The Center notes that apologizing profusely for a mistake is “inappropriate” and can cause the mis-gendered person to feel uncomfortable. It is the student’s job, the Center says, “to remember people’s PGPs.”

UWM stresses tact and sensitivity when approaching others about their preferred gender pronouns. Asking, “What pronouns do you use?” is a safe and respectful way to do so, according to the Center’s FAQ.

When in a group setting, it is appropriate to begin introductions with a name and preferred personal pronouns.

“I’m Xena, I’m from Amazon Island, and I like to be referred to with she, her, and hers pronouns” is a correct way to ask, according to the how-to guide. 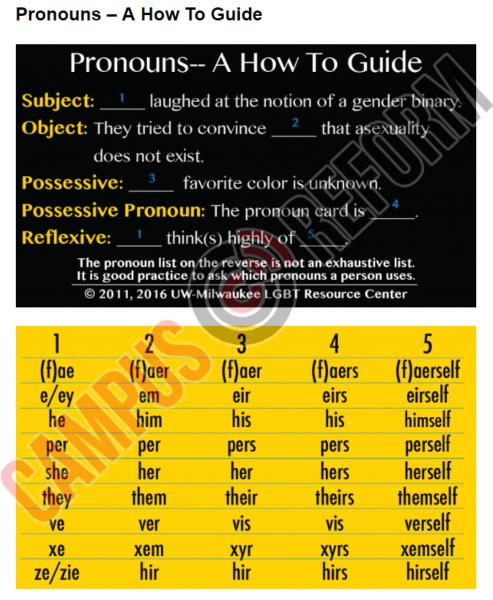 However, the Center warns against calling a person “it” or “he-she” when personal gender pronouns are unclear, since these terms are “offensive slurs used against trans and gender non-conforming individuals.”

“Some faculty members choose to discuss it in class; others don’t. The university supports academic freedom and does not require faculty members to teach specific content. Many students find the cards helpful and will include their preferred pronouns in their email signatures and other communications.”

The Resource Center notes that the English language does not use a gender neutral or third gender pronoun, though some “genderless” languages do. The English language “has been criticized” by some for failing to offer a gender neutral option, and others believe that using the traditionally masculine pronouns “he/his/him” instead of genderless pronouns is a form of sexism or discrimination toward those with differing gender identities.

UWM’s Resource Center calls this a “source of frustration” within the LGBT community, expressing sympathy for students “who are limited by languages” and saying that labeling students as masculine or feminine when they do not identify with being male or female can cause them to feel “disrespected, invalidated, dismissed, alienated, or dysphoric.”

The LGBT Resource Center offers a wide variety of services for students, including a yearly drag show, lavender graduations, and safe space program. The Center is recognized as one of the top campuses in the nation for LGBT students and holds a 4.5-star ranking on the LGBT-friendly Campus Pride Index.