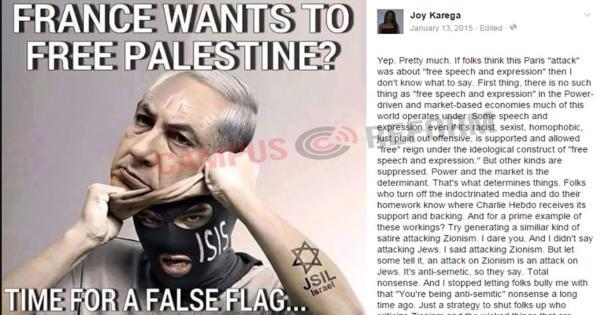 An assistant professor at Oberlin College has finally been suspended for anti-Semitic posts on her Facebook page, roughly six months after the comments first became public.

Oberlin announced Wednesday that Joy Karega, an assistant professor of rhetoric and composition studies, has been placed on paid leave pending an investigation into her conduct, reports The Tablet.

“These postings are anti-Semitic and abhorrent. They have no place at Oberlin.”

“For the past several months, Oberlin College has been considering carefully the grave issues surrounding the anti-Semitic postings on social media by Oberlin faculty member Dr. Joy Karega,” the school said in a statement.

Karega ignited the controversy shortly after the Charlie Hebdo attacks in Paris, alleging in a series of posts on her Facebook page that Israel is responsible for both the rise ISIS and the murder of the French satirists.

The posts were first brought to Oberlin’s attention in January by a concerned alumni group, but the college did not address the issue until the posts were made public by The Tower nearly a month later.

“[ISIS is] a CIA and Mossad operation, and there’s too much information out here for the general public not to know this,” one of the posts read.

“This ain’t even hard,” another post asserted. "They unleashed Mossad on France and it’s clear why,” Karega added, referring to Israel’s national intelligence agency.

Oberlin initially defended the professor’s right to free speech, with Oberlin president Marvin Krislov, a practicing Jew and grandson of an Orthodox rabbi, releasing a statement on March 1 declaring that regardless of the fact that he “cannot comprehend...anti-semitic conspiracy theories,” Karega’s comments are protected speech.

“Cultivating academic freedom can be difficult and at times painful for any college community,” he acknowledged, but added that “this freedom enables Oberlin’s faculty and students to think deeply about and to engage in frank, open discussion of ideas that some may find deeply offensive.”

The school soon changed its tune, however, announcing in March that it would begin investigating the issue after the Board of Trustees challenged the administration to find justification for Karega’s statements.

“These postings are anti-Semitic and abhorrent,” Board of Trustees Chair Clyde McGregor declared in a statement on March 5. “We deplore anti-Semitism and all other forms of bigotry. They have no place at Oberlin.”

Calling the posts “repugnant,” McGregor asserted that “these grave issues must be handled expeditiously,” and put the onus on Oberlin faculty and administrators to explain to the Board what academic merit Karega’s comments may have had.

Now, approximately six months after Oberlin first became aware of Karega’s posts, the college has suspended her and is promising to investigate the issue.

“Until that process is complete, Dr. Karega has been placed on paid leave and will not teach at Oberlin,” the school concludes, adding that “in recognition of the sensitivity of this review process and the privacy of the individuals involved, we will have no other comment until the conclusion of the process.”