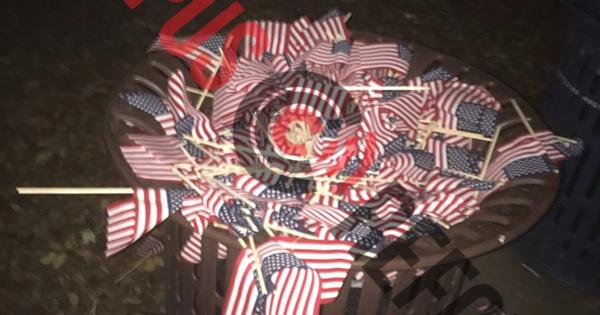 The Occidental College Republican Club had its 9/11 memorial vandalized Saturday night, with all 2,997 of the flags summarily discarded.

“At midnight early this morning, vandals crushed, snapped, and threw in the garbage every single flag,” the group said on its Facebook page. “Not one was left in the ground. Not only did they destroy the memorial, they put posters and flyers up that shamed the victims of 9/11.”

“If you try to destroy it, we will rebuild it.”

The memorial consisted of 2,997 American flags to represent the number of lives lost in the 9/11 attacks, similar to a display at Saddleback College that was first denied approval by the administration and then vandalized by a professor when the students went through with it anyway.

“This memorial was meant to symbolize the coming together of this country in a time of crisis,” Occidental College Republicans Vice President Max Woods told Refined Right. “Those who destroyed the memorial represent the intolerance that has pockmarked universities across the entire nation. This isn’t a political message, this is a message to remember all who died that day.”

Students from across the campus joined the CR’s shortly after 1:00 a.m. in picking the flags out of the trash and putting them back in the ground. 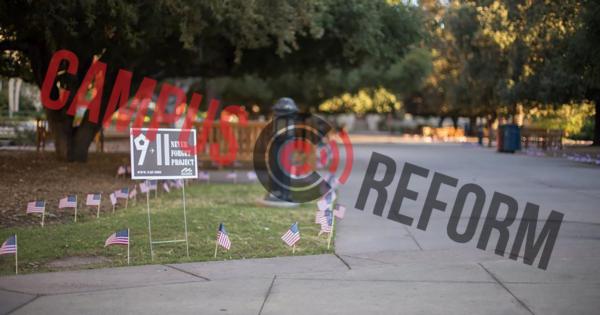 “We had about 15 people out there at that time pulling them from the garbage and putting them back in the ground. Half of these people I have never seen before,” Woods said, noting that the process of returning the flags to their original formation took about an hour.

The group stayed by the flags until 4:00 a.m., later returning to find about 50 flags uprooted once again. The flags were again placed in their formation, and the group concluded with a final statement asking “that all students respect the memorial for the remainder of its time in the quad,” promising would-be vandals that “if you try to destroy it, we will rebuild it.”

The group’s memorial was a part of Young America’s Foundation’s “9/11: Never Forget Project,” which is dedicated to “remembering the innocents murdered by radical Islamists.” Over 200 schools participated in the event.

UPDATE: Occidental provided Campus Reform with a statement that was sent out to the campus community verifying that the display had been officially approved, and vowing to search for the perpetrators.

"We don't yet know who is responsible for this incident, but the college is investigating and will take appropriate disciplinary action," the statement asserts before going on to address the free speech implications of the vandalism.

"The right and freedom to debate complex, contentious issues and disagree with each other is fundamental to what we do at Oxy," the college states, adding that "at the same time, we may not express ourselves in ways that prevent others from engaging in protected speech."