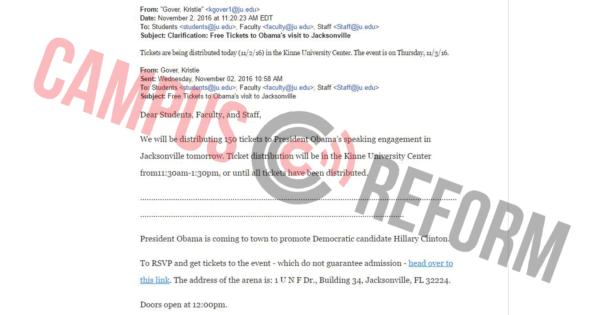 The Dean of Students at Jacksonville University sent out a campus-wide email Wednesday offering tickets to a Barack Obama rally for Hillary Clinton, but failed even to mention that Donald Trump would be speaking in the city on the same day.

The Clinton and Trump campaigns both held campaign rallies in Jacksonville Thursday, with President Obama speaking on Clinton’s behalf at the University of North Florida (UNF) while Trump himself spoke at the Jacksonville Equestrian Center, according to WJXT.

Yet the email from Dr. Kristie Gover, JU’s senior VP for student affairs and dean of students, refers exclusively to the Clinton event, saying JU would be distributing 150 tickets to anyone interested in hearing Obama “promote Democratic candidate Hillary Clinton,” but making no mention whatsoever of the competing campaign stop.

“We will be distributing 150 tickets to President Obama’s speaking engagement in Jacksonville tomorrow,” the email begins, explaining that “ticket distribution will be in the Kinne University Center from 11:30 am-1:30 pm, or until all tickets have been distributed.”

A flyer paid for by the Florida Democratic Party to promote the appearance states that “[Obama] will lay out the high stakes of November’s election for Florida families and highlight Hillary Clinton’s vision for an America that is strong together, with an economy that works for everyone, not just those at the top.”

Or, as Gover put it much more succinctly, “President Obama is coming to town to promote Democratic candidate Hillary Clinton.” 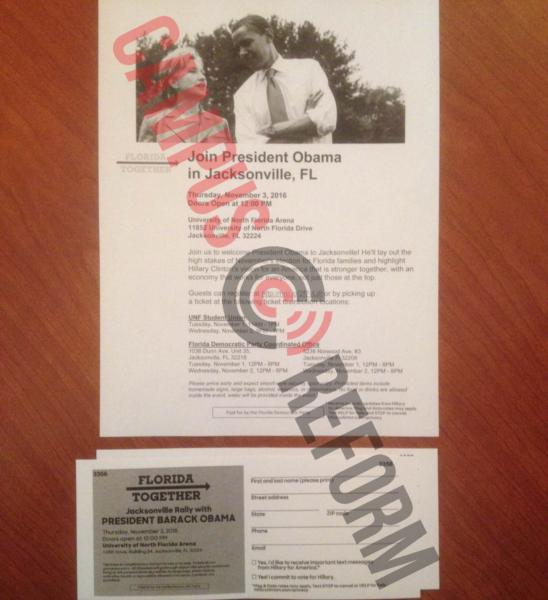 "I think it's discouraging that institutions of higher learning aren't playing fair when it comes to advancing or advocating for a wide array of political ideologies,” Florida College Republicans Chairman Cade Marsh told Campus Reform. “This is a systematic problem, where there's a disconnect between the administration and the will of the students, and it's something that continues to backfire."

Campus Reform reached out to Jacksonville University for comment, but did not receive a response in time for publication.