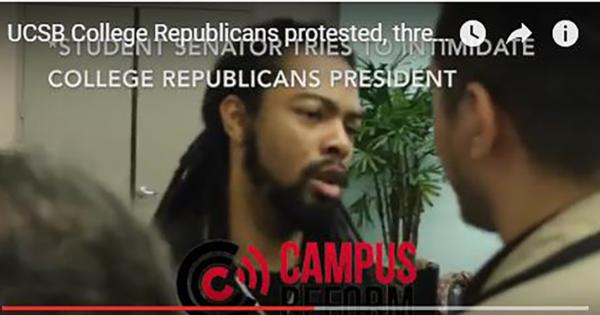 The University of California, Santa Barbara College Republicans have faced significant backlash for attempting to bring conservative commentator Ben Shapiro to campus, including protests of a funding request meeting as well as physical threats from a student senator.

According to a statement on the UCSB College Republicans Facebook page, funding requests for speaker events must be approved by both the Associated Students at the Finance & Business Committee (ASF&B), as well as the Student Senate. The CRs were able to get their event approved by ASF&B, but began to face problems when the request moved to the Senate.

“Yo, do you wanna catch these hands? I’ll fuck your ass up!”

“Upon discovering that our funding request had been approved by ASF&B, the UCSB Black Student Union organized an event entitled ‘Senate BLACKout,’ taking place at the Senate meeting on Wednesday, November 2nd, in order to protest ASF&B’s vote to fund our event as well as to demand that the Senate nullify ASF&B’s decision,” the CRs wrote in an official statement.

At the Senate meeting, footage captured by the UCSB CRs and provided to Campus Reform shows students condemning the group for trying to bring Shapiro to campus, stating that the conservative commentator is “transphobic, homophobic, and racist” and threatens their “comfortability [sic].”

“This event is a direct attack on black students at our campus and perpetuates the marginalization of black students in society,” one student said at the meeting.

Another asserted that while he “understand[s] there’s freedom of speech in this country,” he is opposed to “hate speech” because such speech “leads to self harm.”

After one student accused the UCSB CRs of attacking and threatening members of the Black Student Union during an altercation last semester, the CRs assured the Senate that they had video of the alleged attack that proved it was instigated by the BSU.

In fact, one of the student senators who voted on the funding request, Jordan Mitchell, had physically threatened members of the club for hanging posters for a Young Americans for Liberty event on campus.

“Yo, do you wanna catch these hands?” Mitchell yelled at the CRs, using a slang phrase that means to initiate a fight. “I’ll fuck your ass up!”

The CRs said while they filmed this altercation during the spring semester, they had no plans of releasing the tape until the altercation was referenced during the Senate meeting.

“We released this tape not out of malice; we only considered releasing it this week when a BSU member at the Senate meeting made the accusation that, in said altercation, we ‘attacked’ the group which had confronted us,” the CRs explained.

During the meeting itself, Mitchell can be seen leaving his seat on the Senate board, approaching USCB CR chairman Andrew Gates, and asking Gates if he would like to go outside to fight before being escorted away be a female friend.

One student directly addressed the “snake” Senate members who had expressed approval of funding the event, calling their support of free speech the “greatest threat to democracy today.”

At one point during the meeting, a female administrator tried to block the UCSB CR camera and smack the phone out of the cameraman's hand, and later the cameraman was even asked to stop filming by the Speaker of the Senate, but respectfully declined to do so.

Despite the protest by more than 100 students causing the meeting to run six hours, 16 of 23 Senators voted to approve funding for the Shapiro event, according to The Daily Nexus.

“I think you understand the value of free expression and I think you understand what’s at stake here,” a supporter of the CRs declared during the meeting. “But if you don’t, I would like to remind you that the world is watching you, the media is watching you, and no matter what the people in this room say, the general public will not take kindly to the silencing of UCSB College Republicans.”