Amber Athey and Cabot Phillips White House Correspondent at The Daily Caller @amber_athey on Nov 24, 2016 at 9:39 AM EDT 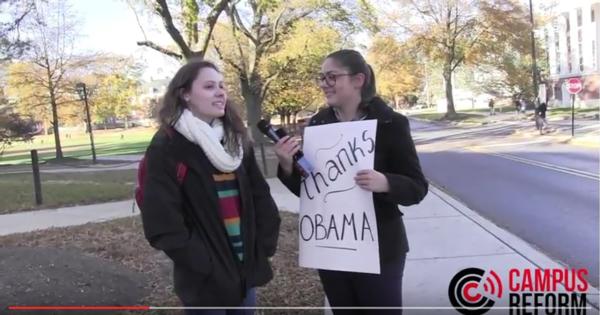 With the Thanksgiving holiday upon us, families will soon be gathered around their tables to give thanks.

In honor of the holiday, Campus Reform visited the University of Maryland to find out if students are thankful for Obama’s presidency, and if so, what exactly they’re thankful for.

Carrying a “Thanks, Obama” card, Campus Reform asked young Obama supporters what the president has done throughout his two terms that warrants their thanks, but found many were unable to name or defend a single policy achievement.

“The main thing I think that he did was try to unify this country,” one student said, before admitting that it was “tough” to say whether the country is more unified today than it was prior to Obama taking office.

Several students were also unable to answer for the skyrocketing premiums under the Affordable Care Act, with one student admitting she was unsure how insurance works because, “my mom pays my insurance.”

“Nothing goes smoothly right away,” another ACA fan claimed. “You know, your wallet’s not the most important thing.”

One student even erroneously attributed the Supreme Court’s legalization of same-sex marriage to President Obama, and was unable to name any of the president’s other initiatives, explaining, “I don’t know, actually.”

Others faced a similar problem when trying to name policies they were thankful for, with answers including, “I don’t have any specifics,” “I have no idea,” and “Can I phone a friend?”

A popular theme throughout the day were allusions to Obama as the “cool president,” with many students thanking him for personality traits as opposed to policies.

“Thank you for being the funniest president of all time,” one student said, prompting another to chime in that “he does seem to have a good sense of humor.”