BLM flag on display for two weeks at Northwestern 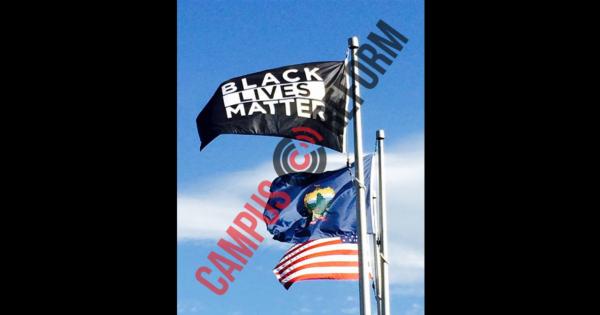 The Black Lives Matter flag will fly for two weeks at Northwestern University while the school hosts student-organized programming on black lives in the United States.

Northwestern raised the flag above the Norris University Center on Tuesday morning and will keep it there until the programming is completed, reports The Daily Northwestern.

“This is how we create permanence.”

Programming will include talks and open forums held by various student groups, a screening of the movie 13th—a documentary that explores racial inequality in the U.S. prison system—and a candlelight vigil for black people killed by police officers.

Danielle Harris, one of the student organizers of the programming, said she was inspired by the University of Vermont’s decision to fly the BLM flag and wondered why “Northwestern can’t do that.”

Harris said she and other students approached administrators with the idea to host BLM-centric programming and discussions about “the statement ‘Black Lives Matter,’ the greater Black Lives Matter movement, and the state of Black lives within our country.”

“Doing these large-scale events that build community, that build coalitions, that unite different groups and students together, is important because this is how we become lasting,” Vinson explained. “This is how we create permanence.”

According to Harris and Vinson, students were fully supported by Northwestern employee Jeremy Schenk, who serves as the executive director of the Norris University Center and called the programming “fantastic.”

“We want to create a facility where we ensure that everybody is able to build community here,” Schenk said. “We’re really proud of our students who have worked hard to make sure that we can have this really strong two weeks of programming just to engage in the dialogue that’s really important and to be able to do it in a safe and intentional way.”