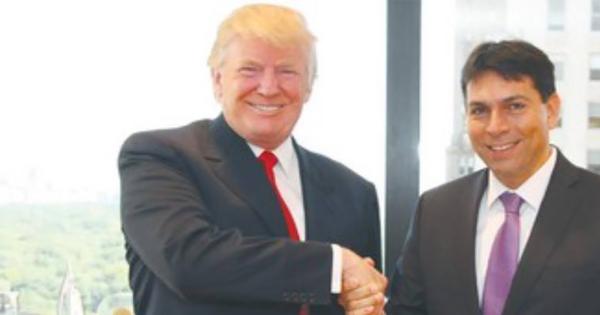 Broadening the scope of their anti-Trump protests, Columbia University students are planning to give a rude welcome to the Israeli UN Ambassador when he comes to campus next week.

Danny Danon, Israel’s Ambassador to the United Nations, is scheduled to speak at Columbia on February 13, and a coalition of six progressive student groups is planning a protest called “Racists Not Welcome: Protest the Israeli Ambassador at Columbia” because they say that President Trump copied his immigration policies from Israel.

“Danon refers to African migrants as ‘infiltrators’ and ‘a national plague,’” the event page claims. “He cheers the murder of activists delivering aid to Gaza; he wants to strip Palestinians in Israel of all rights unless they sign a loyalty oath to Israel as ‘a Jewish state’; he writes in The New York Times that Israel should annex the West Bank, abandoning even the pretence of the ‘two-state solution.’”

The description reminds students that “we have come together to protest Donald Trump in recent weeks,” goading them with the assertion that, “untroubled by the anti-Semitism of Trump’s closest advisors, Danon is a cheerleader for Trump and the Republican right.”

“From racist walls to repressive border policing, Trump copies Israel,” the activists declare provocatively. “Danon is the official representative of a state born, like America, through savage ethnic cleansing of the original inhabitants. His is a state that besieged and bombed the Palestinian people since its inception.”

The description concludes by once again framing the issue in ideological terms, describing the demonstration against Danon as part of a larger fight against conservative policies.

“We will beat the far-right, but we will only beat them if we turn up everywhere to fight them,” it proclaims, inviting students to make a public declaration that “we do not welcome virulent racists on our campus.”

Event organizers, however, say the criticism of Danon is unfounded, calling it another example of the anti-Israel bias of certain student groups on campus.

“Danny Danon is Israel’s Ambassador to the United Nations and is coming to Columbia University to speak to students about Israel’s position, struggles, and perspective on the future,” Rudy Rochman, the president of Columbia's Students Supporting Israel group, told Campus Reform. “As an Israel cultural group, we wanted to expose students to Israel’s stance and give them the opportunity ask questions to Israel’s ambassador.”

“SJP [Students for Justice in Palestine] and JVP [Jewish Voice for Peace] are two student hate groups on campus, who use the legitimate struggles of Palestinians’ to destroy Israel’s image on campus,” he claimed. “Their strategy has been to piggyback off of the struggles of other minority movements and latch on to them as they inject their anti-Israel venom. They do that when they yell ‘apartheid’ or ‘boycott’ by directly hijacking the South African & and African American civil rights movements.”

Despite the event organizers tying Danon to Trump, Rochman asserted that “this event has nothing to do with Republicans or Democrats, and definitely has nothing to do with Trump,” adding, “these hate groups ride on the fears of their peers and attach their anti-Israel bigotry to issues completely unrelated in pursuit of their agenda to destroy Israel.”