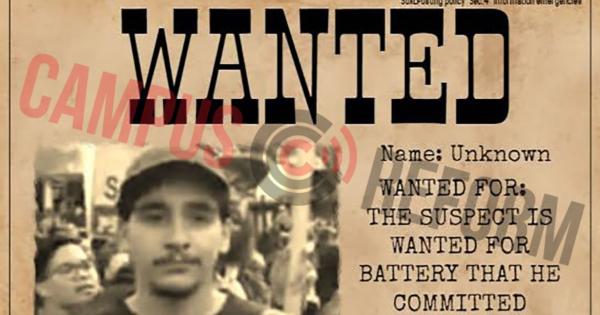 An African-American member of the Sacramento State University College Republicans was assaulted and harassed by protesters with the school’s Students for Justice in Palestine club.

The group, known for claiming that Israelis and Jews are responsible for “genocide,” had over 300 protesters marching against President Trump’s proposed immigration policies.

“Republicans and conservatives do not feel safe on campus, and the past few weeks have absolutely shown why.”

When the protesters saw the College Republicans walk up peacefully, they began to insult them, even calling CR member Floyd Johnson the club’s “token n****r.”

[RELATED: Republican woman barred from Women’s Conference over her ‘values’]

As the group navigated around the crowd, protesters began to call the members “racists” and “white supremacists,” despite the group of six CR’s containing two Hispanic women, a gay man, an African-American, and an immigrant.

When Floyd Johnson spoke up, a protester told him to “join us,” and when he refused, they told him to “learn his history.”

As Johnson attempted to peacefully walk into the crowd with the College Republican flag, several protesters allegedly ripped it violently out of his hands. As he attempted to exit the crowd, the group claims, an unidentified protester put their hands on him and forcefully threw him back.

After the incident, the group went to police with video evidence, and filed battery charges against the protester. Campus police and administration are attempting to identify the student who assaulted Johnson, while the College Republicans have offered a reward for his identification. 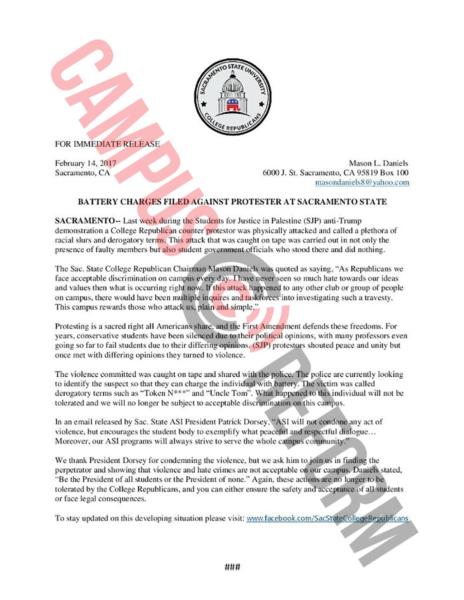 Mason Daniels, Chairman of the Sacramento State College Republicans, told Campus Reform that after he sent an email to the school’s president asking him to condemn the violence at UC Berkeley, someone published it in the school newspaper. After that, he began to receive inflammatory comments from Students for Justice in Palestine and other leftist groups on campus.

Several letters attacked Mason and the other CR’s for quoting MLK, and said that white people need to know the difference between privileges and rights. The group was also harassed on their Facebook page, with several minority members of the club receiving racial insults from campus leftists.

A letter written by Students for Justice in Palestine said that the club doesn’t care about broken windows, while one student, Terese Taylor, said, “I don’t give much of a fuck about what the Constitution, a piece of paper written generations ago by rich, slave-owning white men says,” in defense of the protests.

“Republicans and conservatives do not feel safe on campus, and the past few weeks have absolutely shown why,” Daniels told Campus Reform. “[We have experienced] a battery on our African American CR, him being called a ‘token n****r,’ an ‘Uncle Tom,’ our Facebook page being harassed with talk of white genocide, the Berkeley protests,” and more.

“As Republicans we face acceptable discrimination on campus every day,” Daniels said in a press release on behalf of the College Republicans. “I have never seen so much hate towards our ideas and values than what is occurring right now. If this attack happened to any other club or group of people on campus, there would have been multiple inquiries and task forces into investigating such a travesty. This campus rewards those who attack us, plain and simple.”