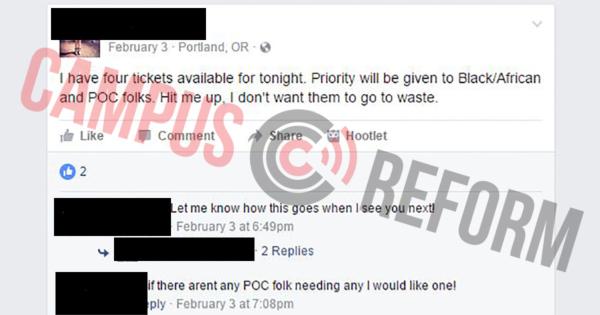 The University of Oregon recently spent $41,500 to bring microaggression scholar Ta-Nehisi Coates to campus, courtesy of the UO School of Journalism, but some students felt "cheated" by the brevity of his latest lecture.

“A Deeper Black: Race in America” attracted a sold-out crowd of 5,500 people earlier this semester, but attendees were disappointed when the lecture ended 35 minutes early after they had made special efforts to make tickets available for non-white students.

The event description notes that Coates tends to focus his speeches on “the systemic racism that is inseparable from the growth of the nation,” specifying that this refers to “the racist policies that have plundered black bodies, black property, and black lives for economic and social gain.”

“How can we reconcile these acts, many of them ongoing, with the supposedly postracial country some claim we are moving towards?” the description asks.

To accommodate the anticipated interested in the event, students were limited to just two tickets each, but when the supply was exhausted, some began suggesting that extra tickets be made available to people of color (POC).

“Does anyone know of a Facebook feature in which requests for extra tickets by people of color can be boosted to the top?” asked Cressa Perloff, a former Occupy Wall Street protester who declined to be interviewed by Campus Reform, saying she would rather “defer to some of my POC coworkers who were there as well.”

“I have four tickets available for tonight,” another commenter said, clarifying that “Priority will be given to Black/African and POC folks.”

In response, a white student interjected that “if there arent [sic] any POC folk needing any I would like one!”

Those who did attend the lecture, however, expressed disappointment with its brevity, with one attendee remarking that “I feel cheated,” while another lamented that she wished “he spoke longer.”

According to The Daily Emerald, Coates was paid $41,500 for the speech, along with several previous events at OU, but wrapped up his latest talk ended 35 minutes earlier than the contract called for, even eschewing a question-and-answer session that had been scheduled for the end of the speech.