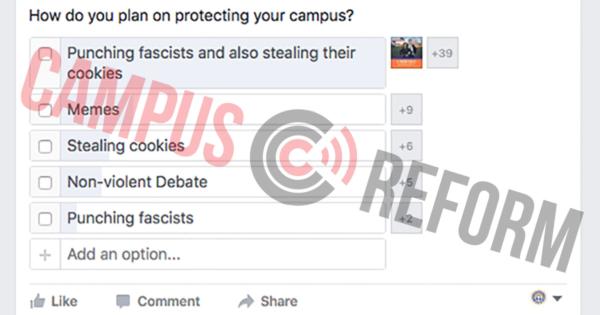 Leftist students at the University of Illinois at Urbana-Champaign showed that “punching fascists” was more than social media bluster by attacking a College Republicans event on campus.

The conservative club was predictably labeled “fascist” by liberal classmates for holding an “Affirmative Action Bake Sale” on campus earlier this month, but one antagonist took things a step further by physically destroying part of the display, according to a video obtained by Illinois Homepage.

The event was intended to start a conversation about affirmative action policies by asking students to pay varying prices for baked goods depending on their respective race, but while dozens of students were engaged in the debate, an unidentified vandal suddenly appeared and threw a batch of cookies on the ground before sprinting away.

While the identity of the vandal has not been released, one student posted a poll on his Facebook page beforehand asking friends to indicate how they “plan on protecting [their] campus” during the bake sale, listing “punching fascists,” “stealing cookies,” “punching fascists and also stealing their cookies,” “memes,” and “non-violent debate” as potential responses.

The most popular response by far, boasting at least 39 votes before the post was removed, was “punching fascists and stealing their cookies,” with eight other students selecting one of those two options exclusively.

Conversely, just 14 students selected either of the two non-violent options, with nine stating that they would respond with “memes” and five indicating they would pursue “non-violent debate.”

That same student had also posted about an “I am not a Quota” bake sale formed in response to the College Republicans’ event, thanking “everyone who took it upon themselves to harass white men because that’s the only way they’ll ever listen.” 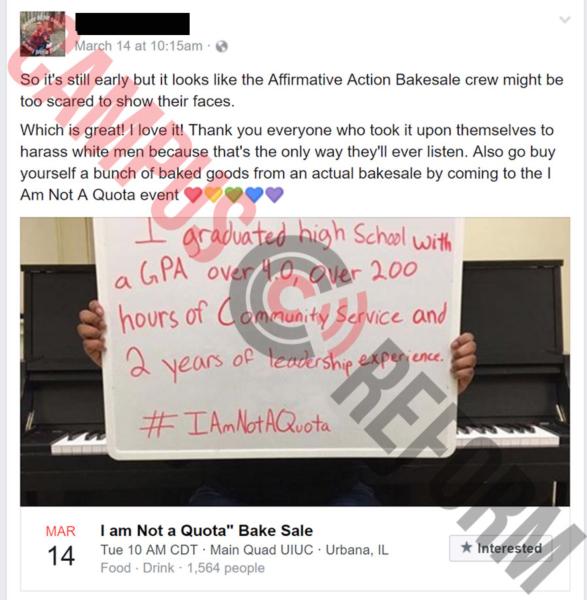 Indeed, the student has used similarly aggressive rhetoric time and again when addressing his conservative peers, advising in one post to not “just punch a fascist; punch a Republican,” because “Their ignorance is fueling fascism. The two are indistinguishable.” 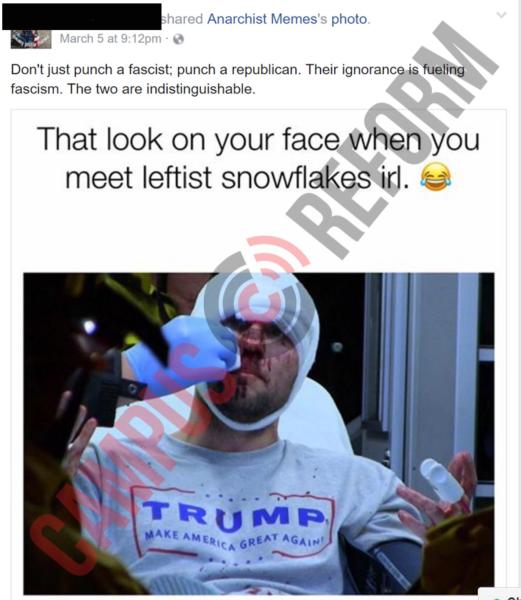 One anonymous source who attended the event confirmed with Campus Reform that the individual in question was in fact responsible for disrupting the mock bake-sale, asserting that “the vandal’s name is [redacted], and he threatened violence and theft towards those holding the bake sale before the event.”

Patrick Wade, communications specialist for the school’s Police Department, told Campus Reform that “patrol officers were called to the scene,” and that “officers have taken action to identify the suspect and have attempted to locate and contact him.”

Those efforts, however, have been “unsuccessful to this point,” according to Wade, who characterized the investigation as “ongoing,” noting that “if he cannot be located, then the case will be forwarded to the Champaign County State’s Attorney for their review and appropriate action.”

Notably, this is not the first time the College Republicans have been subjected to harassment for their political views.

In January, the group’s memorial commemorating the March for Life was destroyed, and the same anonymous source close to the club suggested that it has “experienced several issues with regards to radical leftist groups on campus.”

The student went on to complain that the administration’s response to such harassment has been lacklustre, arguing that the police “are dragging their feet in bringing the vandal to justice.”