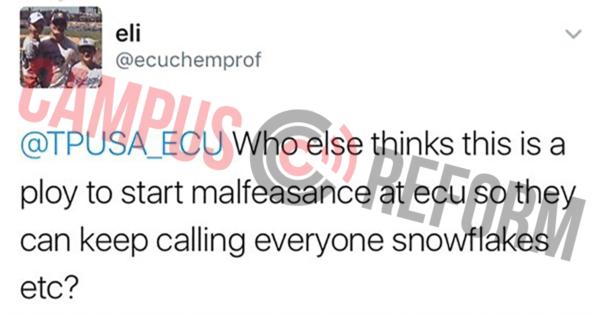 Some students at East Carolina University are threatening protests and violence after Turning Point USA scheduled a speaking event with Tomi Lahren.

Lahren will be speaking at ECU on April 17, and the invite is already engendering intense backlash on social media.

“Who else thinks this a ploy to start malfeasance at ECU so they can keep calling everyone snowflakes etc.?”

According to Twitter screenshots obtained by Campus Reform, students threatened to “burn the whole university,” “start a petition to cancel this event,” and “wreak havoc.” 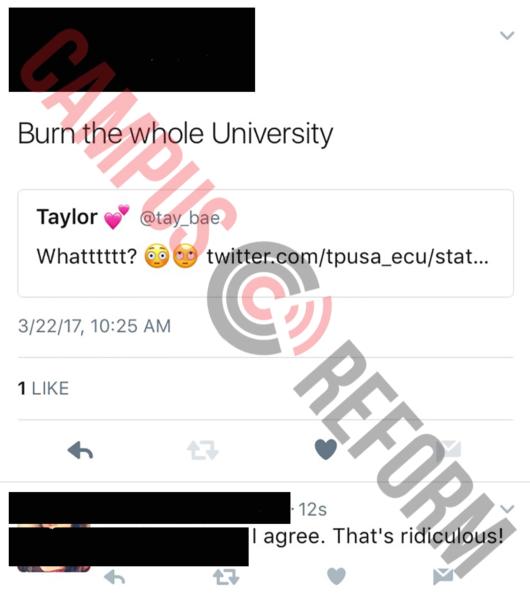 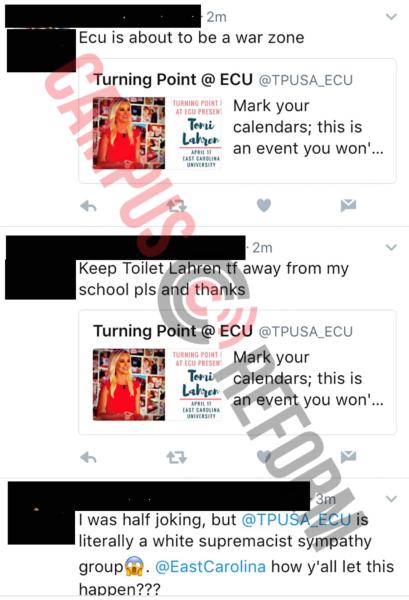 Several students also promised that if their attempt to get the event canceled failed, they would protest it instead. The speaking fee is $15,000, and ECU will be covering the cost.

"Who wants to start a campus wide protest with me to keep this crazy bitch away from ECU?" one student asked. 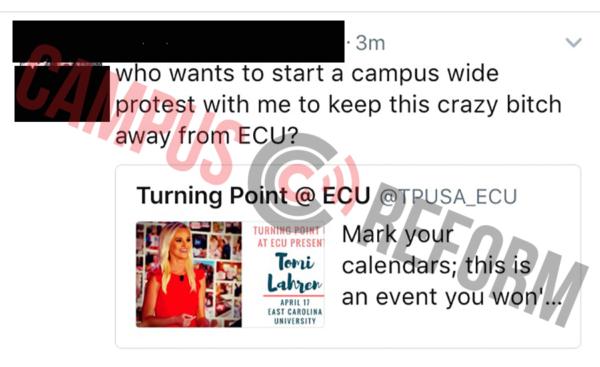 Giovanni Triana, the President of ECU’s TPUSA chapter, told Campus Reform that the event isn't intended to be partisan or political.

“Turning Point USA, in conjunction with ECU’s Student Involvement and Leadership, is hosting Tomi Lahren to expose students to a minority viewpoint on campus that is often underrepresented—stressing the importance of free speech, tolerance, and diversity of thought,” Triana said. “The decision to host Tomi Lahren was based on the aspiration to live up to ECU's Creed that encourages students to 'respect and appreciate the diversity of our people, ideas, and opinions.’”

Saying that the threats to censor speech “pose a problem to intellectual growth,” Triana emphasized that Turning Point USA, the Student Government Association, and East Carolina University “do not support any particular political views,” and are bringing Lahren to speak to “show the importance of listening to those we disagree and engaging in civil discourse.”

Nonetheless, Tirana says that he has been personally harassed because of the Lahren invite, noting that he changed his personal Twitter handle “because of all the hate and vitriol I received from the left.”

When he complained about the "racist and bigoted comments" he had been receiving, one of his antagonists casually dismissed his concerns, saying, "black people can't be racist." 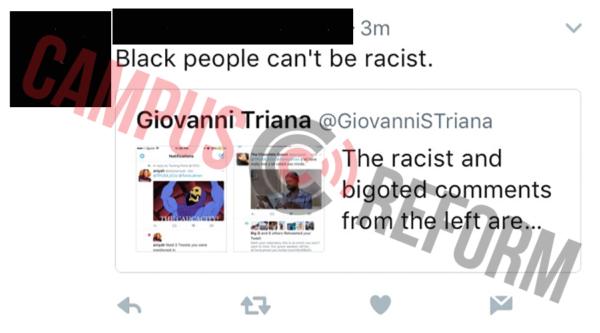 “I believe that college is a marketplace of ideas that allow concepts and ideas to be challenged and judging based on empirical evidence,” Triana concluded. “This provides an environment for the strongest theories to survive. Theories after all, are like viruses, they build off one another. If we censor speech because it's deemed offensive, sooner or later, we will all be left in silence.”

Dr. Tracy Tuten, a Professor of Marketing at ECU, told Campus Reform that the backlash didn't surprise her, but nor has it dampened her enthusiasm for the event.

“I'm excited about Tomi Lahren's visit and plan to attend her talk at ECU,” Tuten said.

Another professor, Dr. Eli Hvastkovs, expressed a rather different reaction on Twitter in response to TPUSA’s statement explaining its decision to invite Lahren, asking, “Who else thinks this a ploy to start malfeasance at ecu [sic] so they can keep calling everyone snowflakes etc.?” 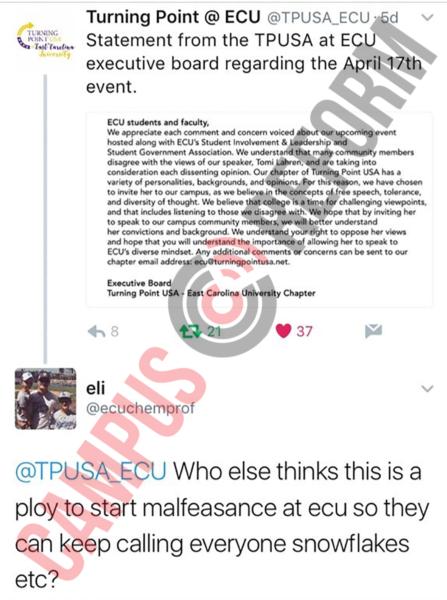 When approached by Campus Reform for elaboration on his views toward Lahren, however, Hvastkovs simply stated, “She’s great!”

Campus Reform reached out to ECU for comment, but did not receive a response in time for publication.