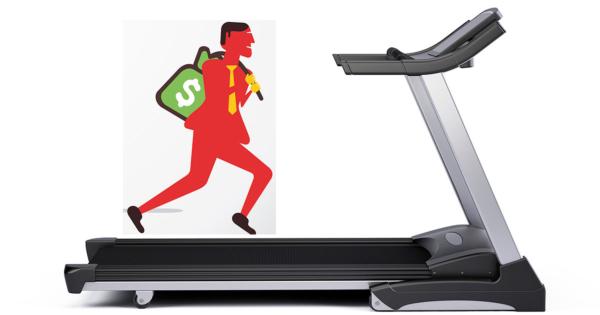 Adding to an already damaged reputation, a recently released report shows that the Chancellor of the University of California, Berkeley spent an estimated $8,500 in taxpayer money on his personal fitness expenses.

After being kept from the public for six months, a report surrounding a university investigation into the “possible misuse” of university resources by Chancellor Nicholas Dirks was released last week and obtained by Campus Reform, showing Dirks neglected to pay an estimated $5,000 on a gym membership and up to 48 personal training sessions, with upwards of $3,500 being spent on the installation of a “Precor Cross Trainer” machine in his home.

Dirks appears to defend himself by claiming he is a “workout nut.”

While significant details had been redacted from the report, such as the identities of Dirks’ associates who had approved his exuberant personal spending, The Los Angeles Times reported last year that Mike Weinberger, who was head of the elite institution’s Recreational Sports Facility at the time, found nothing wrong with the expenses and even approved Dirks’ use of the services “to promote his fitness program.”

Dan Scannell, PRA/COI coordinator, elaborated on the redaction of several key names when speaking with Campus Reform, explaining that “certain witness names and other identifying information were redacted because [of] the public interest in maintaining a robust whistleblower investigation process and encouraging witness cooperation,” adding that “the constitutional right to privacy clearly outweighs the public interest in disclosure.”

The investigation concluded that Dirks had inappropriately used the Recreational Sports Facility “without paying corresponding fees and without appropriate authorization,” nor did he “have authorization to receive complimentary personal training sessions.”

In the report, Dirks appears to defend himself by claiming he is a “workout nut,” and that he had even intended to pay back past dues, though the investigation found no evidence of this ever happening.

Yet this is hardly the first time Dirks has encountered criticism for his financial choices, with Campus Reform reporting last year that he had spent $9,000 on the installation of an emergency escape door in his office in the event that he may need a quick getaway from student protester, this happening just shortly after he dished out $700,000 on the construction of a security fence.

Nor is this even the first time Dirks has been criticized for his use of the school’s personal trainer, for The San Francisco Chronicle reported in August on a whistleblower allegation that Dirks and his wife had paid for the travel of a personal trainer on non-university business.

Accordingly, System President Janet Napolitano issued a statement shortly after the allegations were released, stating she had accepted Dirks’ resignation and expressed her “deep appreciation” for his efforts.

Notably, Dirks will officially step down from his position June 30, and remain on at Berkeley as a full-time faculty member.

“I look forward to joining on a full-time basis the distinguished faculty that was my primary reason for moving to Berkeley in the first place,” Dirks said in his resignation statement.

Campus Reform reached out to Berkeley comment on why the report was withheld from the public for six months, but did not receive a response in time for publication.