Dozens of University of Baltimore students protested Monday against the school’s decision to host U.S. Secretary of Education Betsy Devos as the fall commencement speaker.

Despite the protest calling for DeVos to be disinvited, along with an accompanying petition boasting more than 3,000 signatures, The Baltimore Sun reports that University President and former Baltimore Mayor Kurt Shmoke stood by his decision, saying it is “in the best tradition of the university,” which “stands for freedom of speech” and debate, even on controversial issues.

"The overwhelming majority of UB students and alumni...are appalled at this decision."

“I do feel that having the U.S. Secretary of Education on our campus is something that’s very important for the university, and in the long run, I believe that students will recognize that whether they agree with her position on issues or not,” he added.

[RELATED: Prof: ‘I’d be ok if #BetsyDeVos was sexually assaulted’]

Meanwhile dozens of students participated in a “class walk-out” protest, standing up in the middle of their classes and assembling for a rally, where many held signs featuring the hashtag “#NeverDevos.”

Among those present for the demonstration was Democratic gubernatorial candidate and former NAACP President Ben Jealous, who has repeatedly called for Shmoke to rescind the invitation for Devos to address this year’s graduating class.

“Your graduation day speaker is supposed to represent the best ideals of your school and highest aspirations of the students,” Jealous told the students. “Betsy DeVos is quite simply the most anti-public education secretary of education our country has ever had.”

In a tweet that same afternoon, he elaborated that “As a civil rights activist & professor, I'm all for having unpopular & controversial speakers every day except graduation day.” 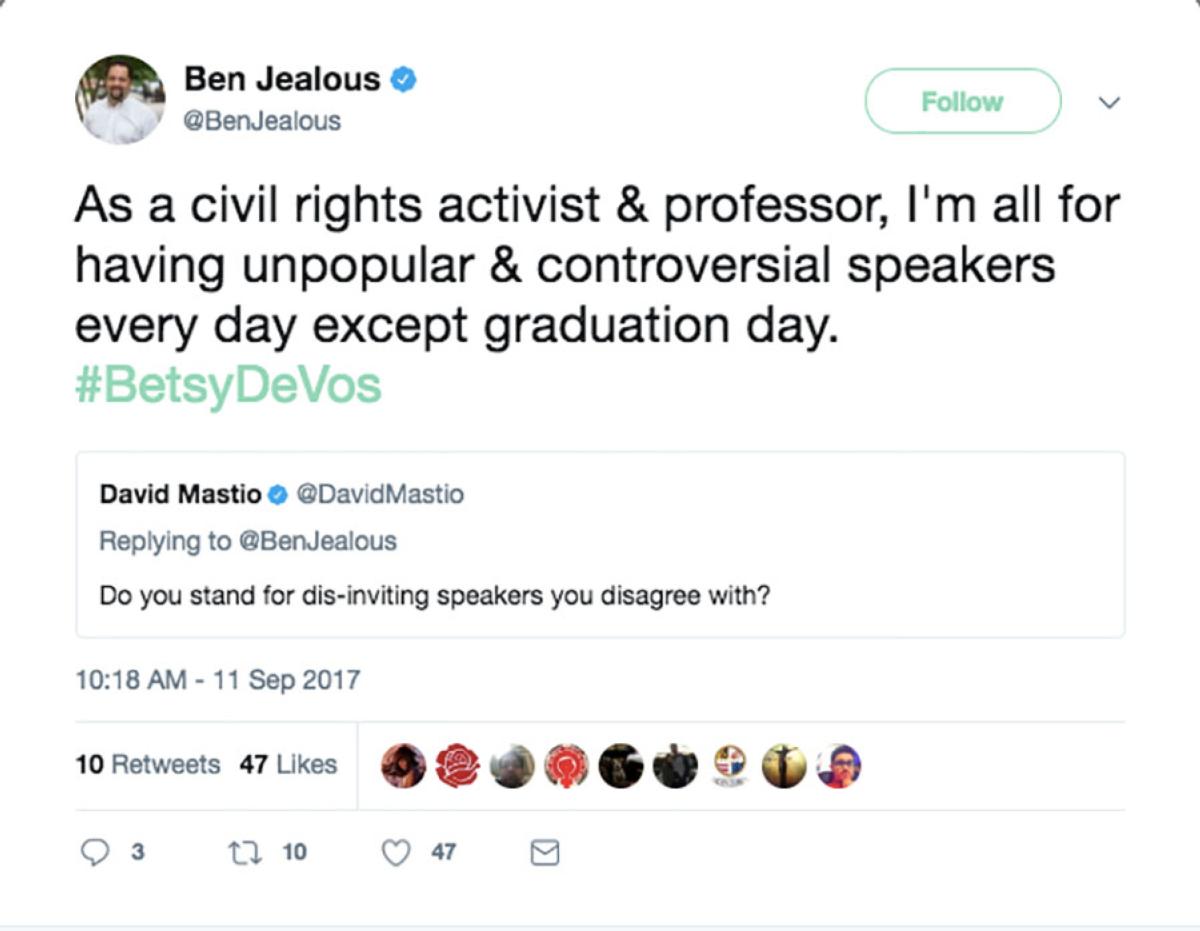 DeVos’ opponents take exception to many of her positions on public education, particularly her support for school choice and her recent decision to begin the process of revising the Education Department’s guidance on how colleges handle accusations of sexual assault.

Shmoke responded to such arguments in an interview with the Chronicle of Higher Education, saying students need to be exposed to differing opinions both for their own intellectual development and to make them aware that disagreement exists in the real world.

“At the time that I invited her, her views on elementary and secondary education were fairly well known, but her views on higher education were not,” he explained. “And as I said in my letter to her, this was an opportunity for her to provide comments on higher-education issues. I still believe that to be the case, and I think this would be important.”

[RELATED: DeVos praises BCU students who sunned her at commencement]

Moreover, “having her at our university is in the best interest of the University of Baltimore because I’m trying to convey to our students the message that they’re graduating into a world in which not everyone agrees with, or has the same point of view on, every public policy issue that is before us.”

Those who signed the petition against DeVos, however, contend that her invitation was “unacceptable” because “the overwhelming majority of UB students and alumni, as well as the Baltimore community in general are appalled at this decision.”

According to the petition, the soon-to-be graduates have undertaken “monumental efforts” to “facilitate an inclusive, empowering graduation ceremony,” but the decision to invite DeVos “has caused, is causing, and has potential to continue to cause direct harm to students,” showing “clear disregard for the safety and well-being of students.”

[RELATED: Prof calls DeVos ‘a powerful handmaiden’ to the ‘patriarchy’]

The authors even make explicitly clear that their concerns are based purely on political differences, complaining that hosting DeVos “creates an implicit endorsement of policies that can and will have a lasting negative impact on the very graduates this ceremony is supposed to celebrate.”

One enthusiastic supporter of the petition framed the demand somewhat less eloquently in a social media post, writing that “If you do NOT want Betsy DeVos to speak at the University of Baltimore as if she even represent [sic] an IOTA of the respectability of the UB student body, please sign this petition,” adding that “UB deserves a speaker that isn’t absolute trash.”

Mike Lurie, a spokesman for the University System of Maryland, told the Sun that the system is standing behind Schmoke’s decision, even as students vowed that they would go so far as to demonstrate during the graduation ceremony itself should DeVos remain as the keynote speaker.

“The USM respects the right of every campus in the system, including the University of Baltimore, to invite and host speakers from a broad diversity of backgrounds, opinions and perspectives,” Lurie said. “The USM equally respects the right of every community member opposed to the views of any particular speaker to make their objections known in a safe and respectful manner.”