Conversations centered around how America is inherently racist and how to best go about “dismantling” the police as it is supposedly an institution that perpetuates “white supremacy.” 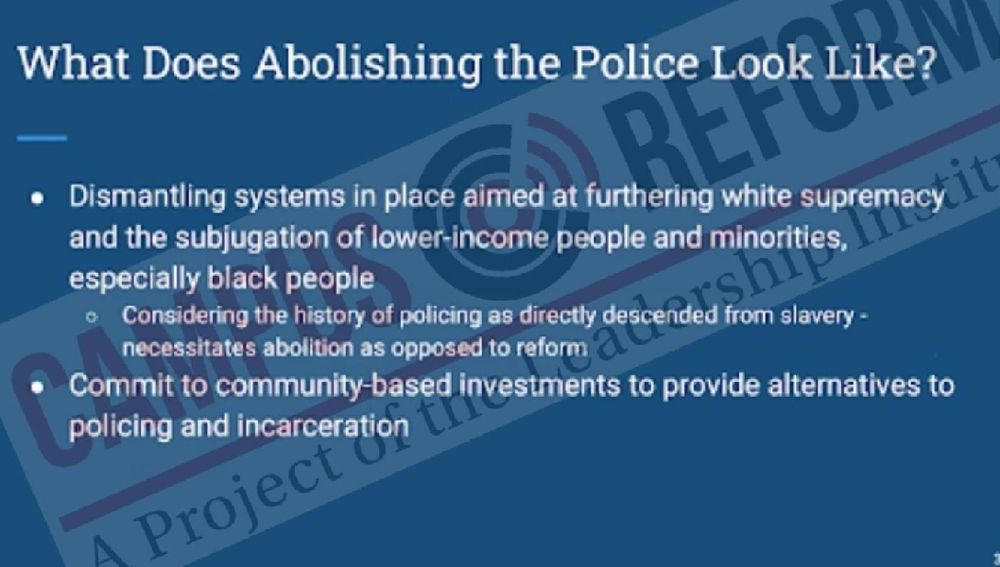 A presentation by Emory University professors and student leaders warned students of the “racism” at “the center of our country’s DNA” and how to “check” one’s “impulse” before calling the police, to make sure one isn’t doing so for racist reasons. 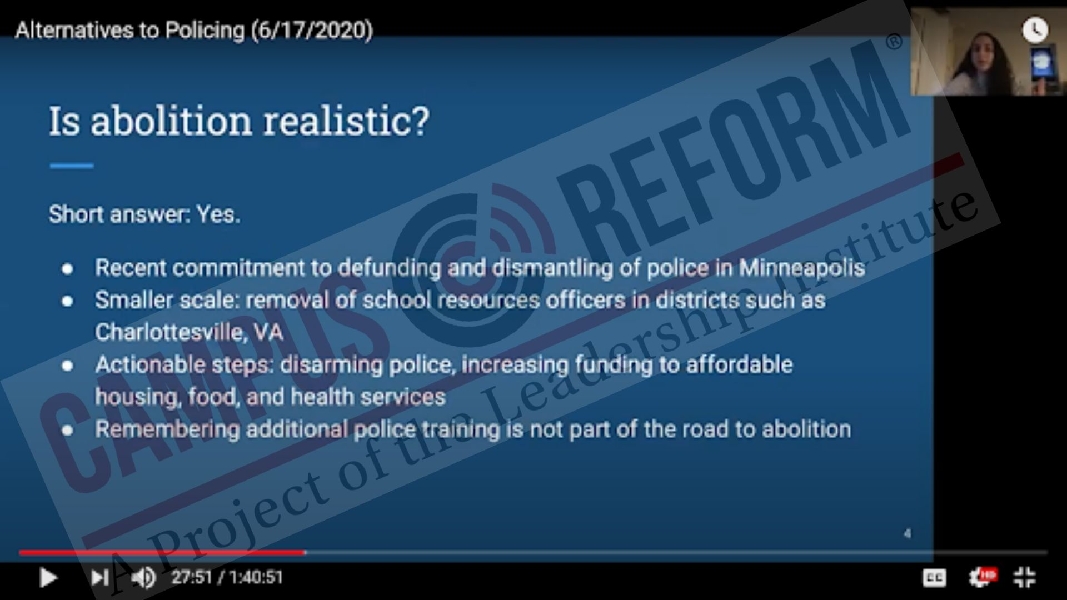 Following the speeches, SPEAR President Liza Cobey led a slideshow highlighting hypothetical scenarios and proposed responses that the community should undertake. The remaining time was set aside for a Q&A.

“Anti-black racism lies at the center of our country’s DNA,” Suddler, who recently published his book on race, Presumed Criminal: Black Youth and the Justice System in Postwar New York, stated in his introductory speech. Suddler mentioned the 1967 Kerner Commission, launched by President Lyndon B. Johnson in an effort to analyze the motives behind the prevalent riots that occurred throughout Detroit, Harlem, and other major cities during the summer of 1967, and proposed policies and other communal solutions.

Suddler agreed with some of these listed solutions and urged the audience to look toward the Kerner Commission as an example of assessing possible alternatives to the police force and reminded them of the purpose of the event. Suddler explained that he likes to bring up the Kerner Commission because “so much of that frustration of watching repeated, failed reform have [sic] really opened up so many of our conversations about abolition, about defunding the police, about what this whole platform is for,” Suddler said, emphasizing the need to think about “alternatives” to policing as it is today.

After a brief presentation from Suh, Cobey expounded on the professors’ introductions and launched a slideshow to clarify the event’s title.

“Just so that we’re all sort of on the same page, what we mean when we say ‘abolition’; at the core, it is dismantling the systems that are in place to further white supremacy and continue the subjugation of lower-income people and minorities, especially black people,” Cobey said.

“And we do this considering the history of policing as being directly descended from slavery, which is what necessitates abolition as opposed to reform," Cobey added. 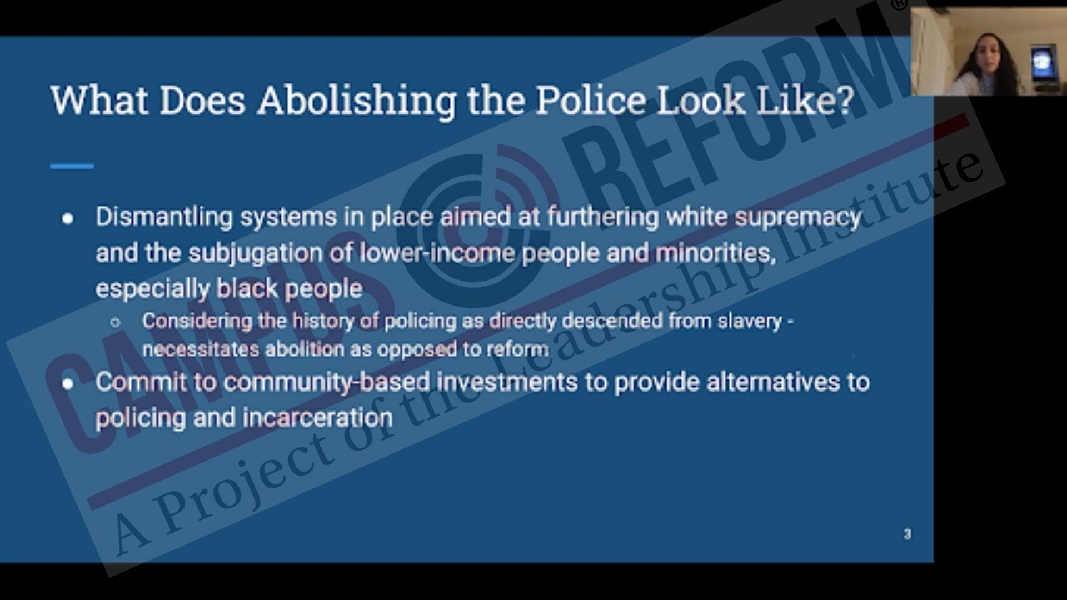 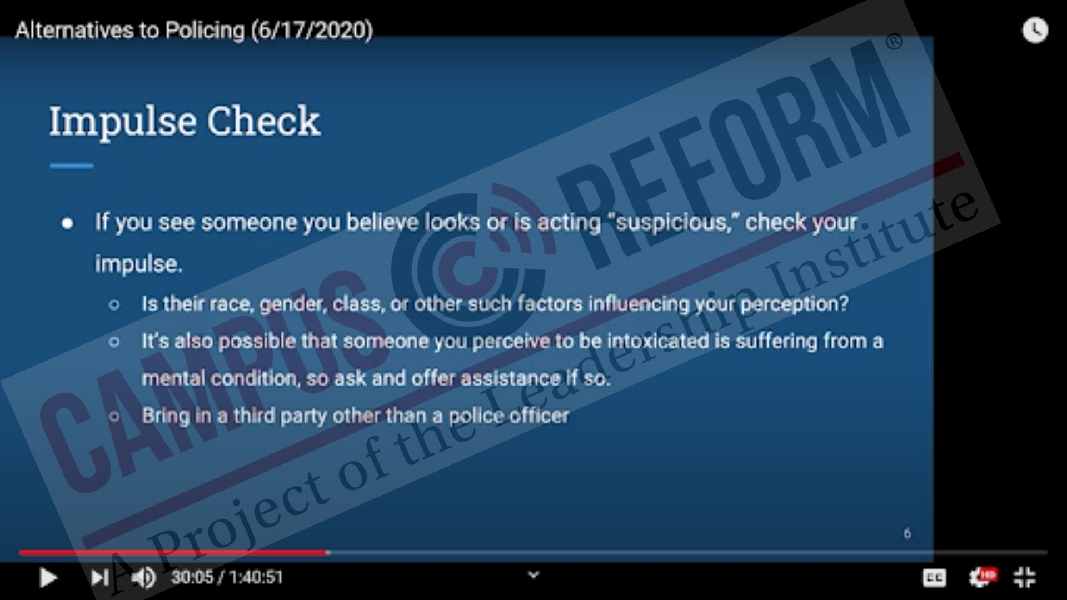 Jasmine Jaffe, the president-elect of Emory College Republicans, told Campus Reform that she disagrees with Suddler and Cobey’s statements, and warned of the dangers of radical absolutism when considering solutions to social issues.

“[The] abolition of police is not an alternative, just like when someone eats unhealthy food, not eating is an alternative,” she said. “Any insulation that abolishing the police will make people safer is factually incorrect and actually result in more harm in poorer communities.”

Cobey denounced the policing system as “broken from its core” and dismissed additional training as an acceptable alternative and instead suggested taking various actions such as disarming the police and redirecting funds to food, health, and affordable housing services. 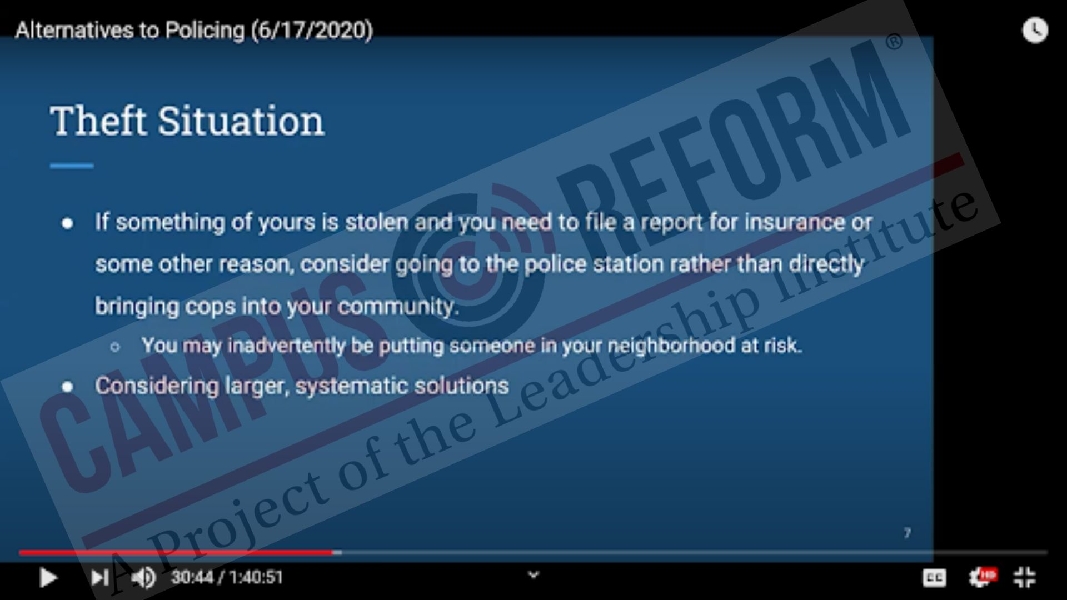 The vice president of SPEAR, Selma Sheikh-Khalil, led the rest of the presentation and urged the audience before calling for police help to “check” their impulse, and to ensure that their reason for suspicion of danger isn’t influenced by the person’s race, gender, class.

Sheikh-Khalil also walked the audience through several hypothetical scenarios to replace what would have been the police’s role to intervene with a “third-party other than a police officer," such as having one's property stolen, “because by calling the police you may be inadvertently putting someone in your neighborhood at risk.” She also referred the audience to other community hotlines, such as the suicide hotline, a mental health crisis hotline, and a roadside assistance hotline.

ADPIAA declined to comment for this story. SPEAR, Suh, and Suddler could not be reached for comment in time for publication. 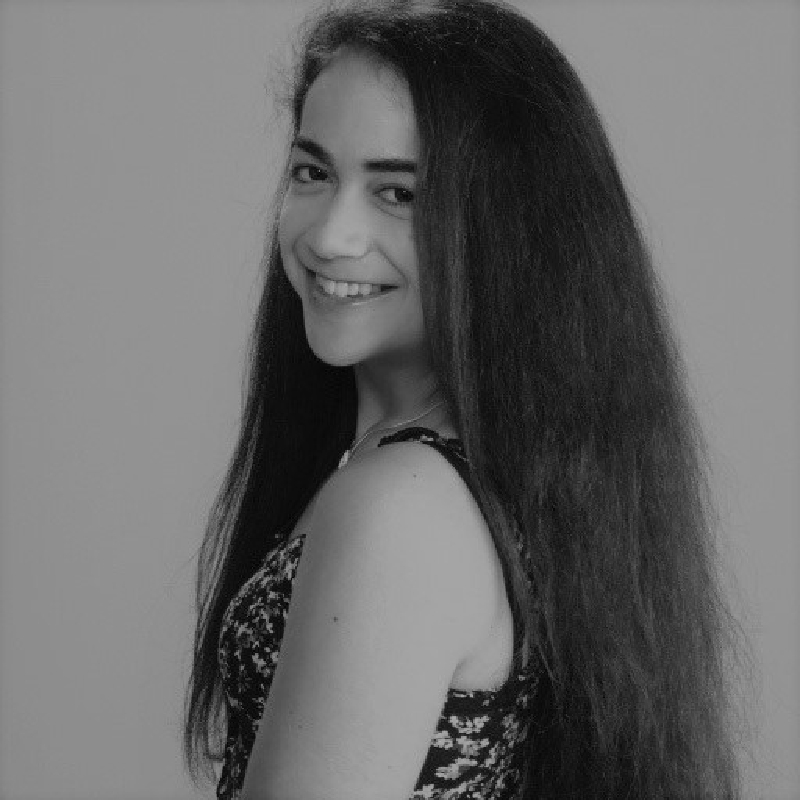