A training program offered by UCLA requested that all "White-Identified" participants have been "previously educated in or are actively engaging" in work undoing racism.

The requirement was changed after Campus Reform contacted the university. 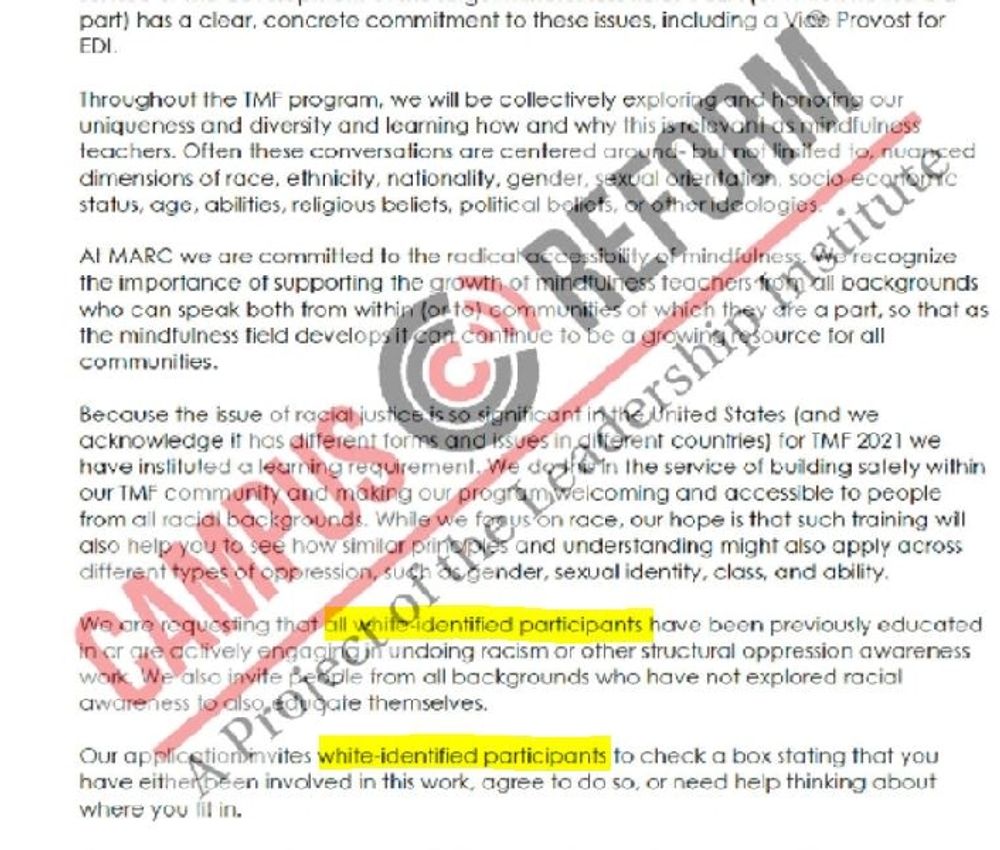 A University of California-Los Angeles “Training in Mindfulness Facilitation” program originally had a requirement specifically for “white-identified” participants, requiring them to take special “Racial Awareness Training.” After Campus Reform contacted the university, however, the original phrasing was scrubbed from the page and replaced.

Hosted by UCLA Health’s Mindful Awareness Research Center, the program "provides training, support, and supervision to those wishing to incorporate mindfulness into their occupation or to share mindfulness with individuals, groups, communities, or institutions.”

In addition to general prerequisites, such as prior classes or experience in mindfulness, the website originally listed an additional requirement: “White-identified participants must either have been previously educated in undoing racism or other structural oppression work or agree to participate in this work before our second practicum in April, 2021.” 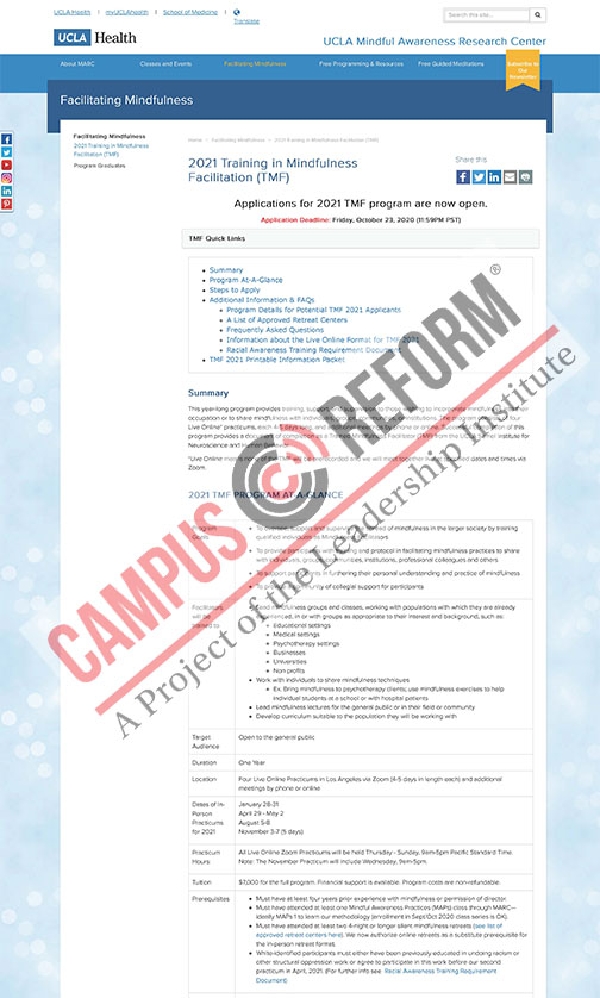 “MARC has had a commitment to both exploring and deepening our personal and professional practice pertaining to issues of equity, diversity, and inclusion (EDI) in the TMF and in service of the development of the larger mindfulness field,” the documentation originally read. “UCLA (of which MARC is a part) has a clear, concrete commitment to these issues, including a Vice Provost for EDI.”

[RELATED: UMich hosts space for 'students that do not identify as persons of color']

The online application asked applications to select from the following list of statements:

I identify as BIPoC (Black, Indigenous, and/or People of Color)

I identify as white and have not previously participated in white awareness training or undoing racism work in the past. I agree to attend such a training before April 29, 2021

I identify as neither BIPoC nor white 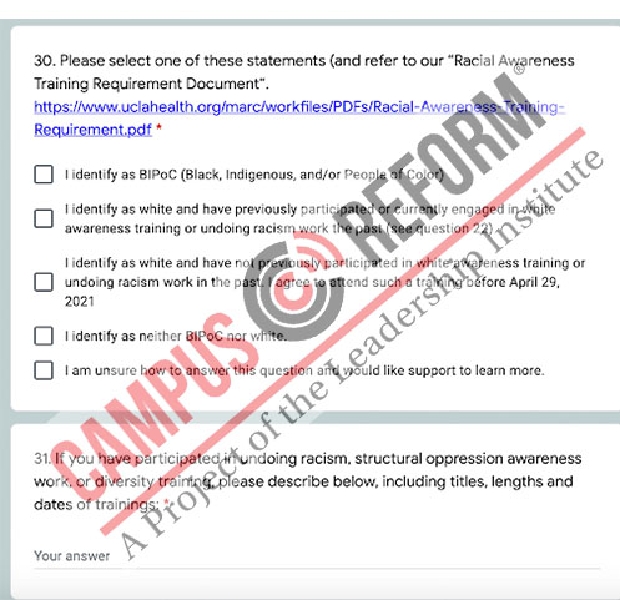 In a document, titled “Racial Awareness Training Requirement,” the program directors elaborated further on this requirement saying, “We are requesting that all white-identified participants have been previously educated in or are actively engaging in undoing racism or other structural oppression awareness work.” 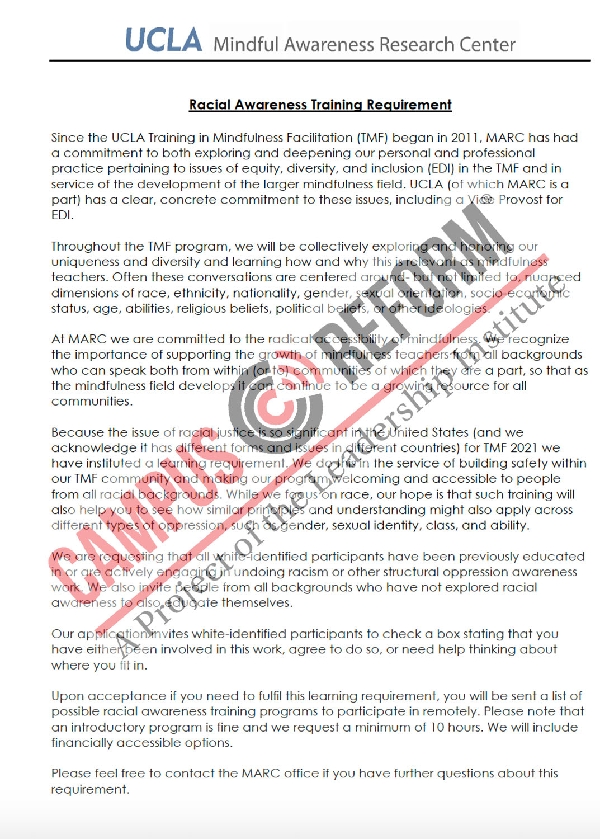 “We also invite people from all backgrounds who have not explored racial awareness to also educate themselves,” the document said.

According to the initial wording of the policy, if applicants had not already completed such training, they would have to take such courses on their own dime.

“Upon acceptance, if you need to fulfill this learning requirement, you will be sent a list of possible racial awareness training programs to participate in remotely,” the document originally explained. “Please note that an introductory program is fine and we request a minimum of 10 hours. We will include financially accessible options.”

The organizers justified this requirement by saying, “We do this in the service of building safety within our TMF community and making our program welcoming and accessible to people from all racial backgrounds.”

After Campus Reform reached out to UCLA for comment, all language specifically targeting white participants was scrubbed.

The main page now reads, “All participants [emphasis added] must either have been previously educated in undoing racism or other structural oppression work or agree to participate in this work before our second practicum in April, 2021.” 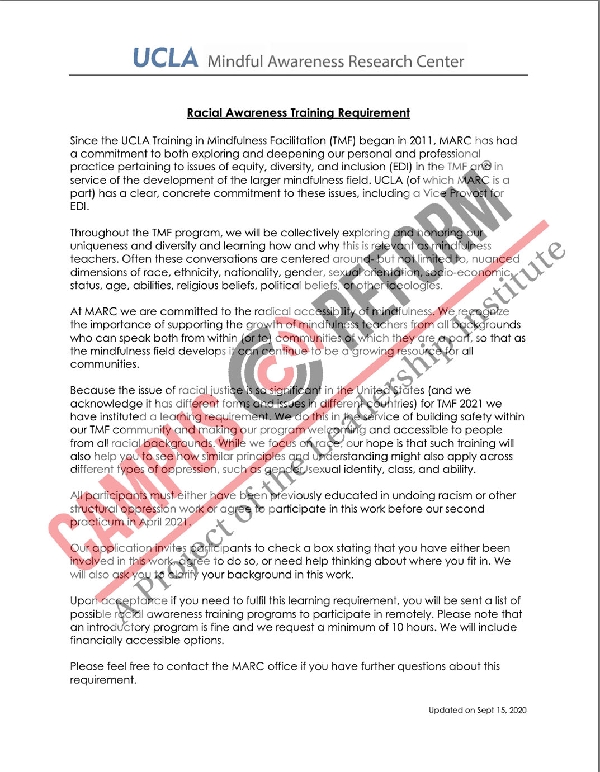 The “Racial Awareness Training” document has also been substantially revised.

Where it had initially said “white-identified participants,” it now reads, “All participants must either have been previously educated in undoing racism or other structural oppression work or agree to participate in this work before our second practicum in April 2021.”

The document that is currently live notes that it was updated on Sept. 15, the same day Campus Reform initially reached out for comment.

The online application form received revisions as well. It now lists only the following three options:

I have not previously participated in racial awareness training or undoing racism work in the past. I agree to attend such a training before April 29, 2021 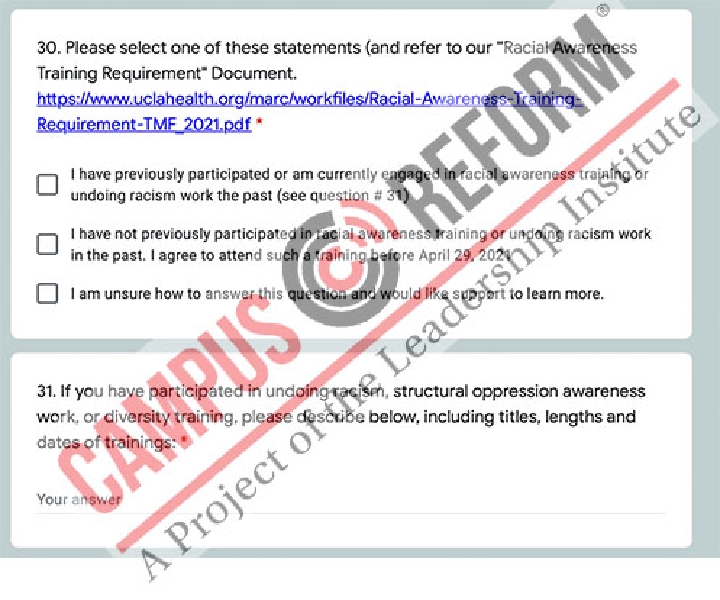 When asked why the materials were changed, UCLA Health responded, “The changes were made to make clear that the racial awareness training requirement applies to all applicants.”

A representative for the Bruin Republicans at UCLA told Campus Reform, “These far-left policies represent the anti-White bias in academia and reflect the disdain the left has for Western Civilization. This class singles out White students and wrongfully treats them as racist by virtue of their skin color.”

“Not only is requiring training for only specific racial groups morally wrong, but it also violates the equal protection clause of the 14th amendment as it subjects one racial group to different treatment,” the Bruin Republicans representative said.

The Bruin Republicans also commented on the fact that the original document was pulled down.

“The removal of the training document shows that UCLA has recognized they’ve been caught and now the act begins to cover their tracks,” they said. “Fortunately, the document has been saved for all to view.”

Diana Winston is the Director of Mindfulness Education at MARC.

According to the MARC faculty page, she developed the Training in Mindfulness Facilitation program. Per her bio, “She has taught mindfulness for health and well-being since 1993 in a variety of settings including the medical and mental health field, and in universities, businesses, non-profits, and schools.”