An Instagram account has been made to disparage a George Mason University freshman and candidate for Student Government president due to his conservative beliefs.

'We don't need to make this a nationalized issue. I'm not running for tax cuts, that's not what I'm doing,' the candidate told Campus Reform.

An Instagram account has been made to disparage a George Mason University freshman and candidate for Student Government president due to his conservative beliefs. 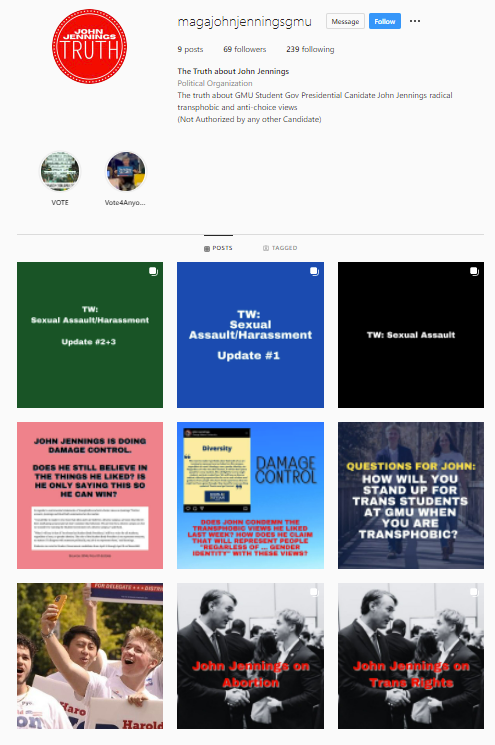 John Jennings launched his campaign for Student Body President in late March with one goal in mind: to bring change to GMU.

Jennings and his running-mate Vivian Hurd are advocating for changes in three areas of campus life: athletics, mental health, and tuition rates.

"It's student government, it's [a] nonpartisan, or so it should be, organization that advocates for the needs of all students," Jennings told Campus Reform. "That's my personal belief, is that even if I disagree with you politically, I want to still understand where you're coming from or advocate for you."

Jennings continued, "I've said that my cabinet would be very, very diverse of all thoughts and opinions because, at the end of the day, we need conversations. And that is what is Mason is lacking right now."

The account in question, @magajohnjenningsgmu, accuses Jennings of being "transphobic" and pro-life.

According to Jennings, the unidentified account creator is operating out of fear.

"I think they're scared, and because they want a one ideology of thought... They just don't want other opinions," he said.

Jennings continued to say that the dirty campaign tricks seen at Mason is reflective of the current state of American politics.

"It is sad to see how much hate is in the world and just watch what people are capable of to lie just to keep someone from trying to advocate for all students," Jennings said. "That's a dangerous road that America is starting to go down, and I'm afraid for the result of that in like 15-20 years when people who are in school right now will be the majority of the population."

He concluded, declaring that the account is "just false."

The ticket issued a diversity statement on Apr. 1 stating that the administration, if elected, would represent "every student on [the] campus regardless of creed, ideology, race, gender identity, etc."

"Regardless of who wins this election, it will be their job to speak for every student. We will fight for every single student, not just a select few," the statement continues. "We will have a diverse cabinet, allowing opportunities for us to seek wisdom and guidance from people who have lived experiences that we might not have gone through."

Jennings and Hurd have also worked to increase bipartisanship by reaching across the aisle to try and kindle conversations with liberal groups including Young Democrats and Democratic Socialists.

"We talked to [students] and what I've said is, 'listen, this is not about politics.' We don't need to make this a nationalized issue. I'm not running for tax cuts, that's not what I'm doing," Jennings stated.

Hurd expressed a similar sentiment, echoing that personal political beliefs would not affect how students are represented.

"I am a firm believer that you can be a good leader and leave personal feelings out of it," she told Campus Reform. "While John and I have our political beliefs, we were not going to incorporate those on campus or have that as our platform because that would be a losing battle.