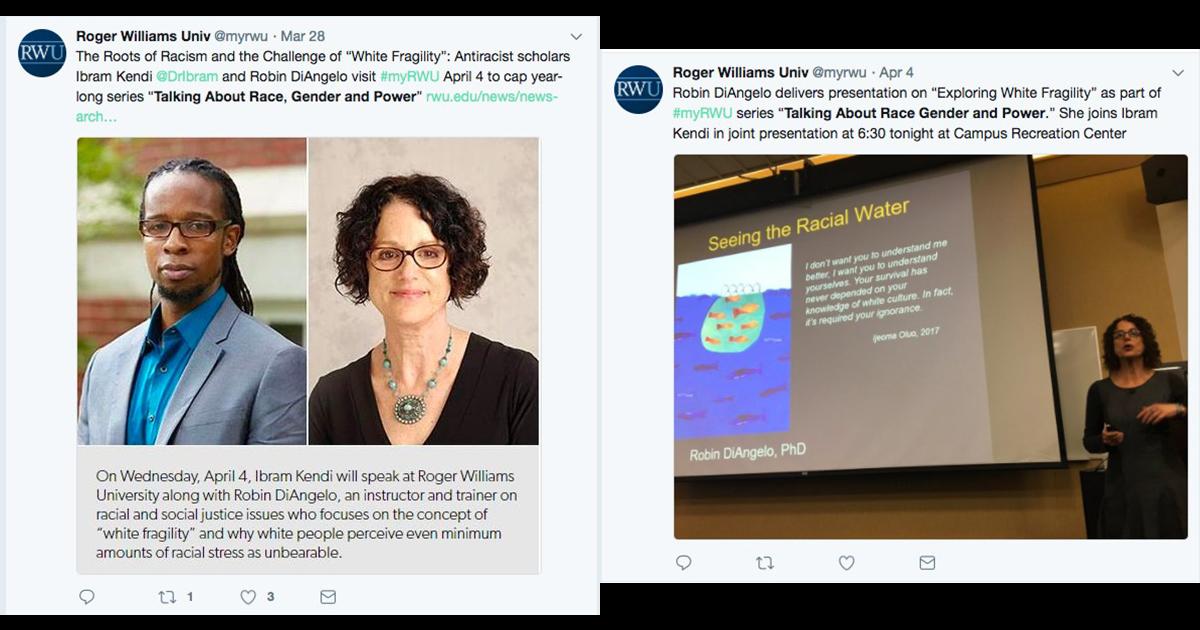 DiAngleo, author of the book White Fragility: Why It’s So Hard to Talk to White People About Racism, spoke to the belief that racism is expressed through power structures rather than actions.

“The dominant culture presents it as...a binary question: Only some people participate in racism and those are bad people,” she stated. “But if you understand racism as a structure, you ask different questions.”

She then cited various instances of “state-sanctioned institutional racism” in America, such as miscegenation laws, “lynching and mob violence,” “employment discrimination,” and “mass incarceration.”

Because “African-Americans are not and have never been in position to do this to white people,” DiAngelo insisted that they cannot be guilty of racism.

“There is no such thing as ‘reverse racism,’” she declared. “Racism by definition includes the weight of historical and institutional power behind it. It is a structure—not an event. It is a structure we are in, and none of us could be or have been exempt from its forces.”

[RELATED: Prof claims ‘there is no such thing as black racism’]

Kendi, who serves as the director of the Antiracist Research and Policy Center at American University, spoke in large part about the elusivity of a universally-accepted definition of racism, pointing out that everyone denies accusations of racism.

According to RWU’s news release, Kendi defined racism as “any idea that suggests that a racial group is superior or inferior to another racial group in any way,” as well as any policy that produces a racially unequal outcome, noting that the assessment does not depend on intent, but rather on the quantifiable consequences.

“With every racist policy in American history, those who benefited or created those policies denied that those policies were racist,” Kendi declared during his presentation. “It’s quite easy to hide intention.”

Slave owners, he pointed out, often tried to justify slavery by claiming that “God’s law” made servitude a natural and beneficial condition for black people, while their ideological successors subsequently claimed that Jim Crow laws created “separate but equal” conditions.

He then implied that contemporary conservatives are employing the same tactics to justify their own policy priorities.

“Talking About Race, Gender, and Power” is RWU’s “annual theme” for the 2017-2018 school year, and “aims to engage the public in positive, civil discourse and the sharing of divergent viewpoints on the intersection of race, gender and power in America.”

Other events that have been held as part of the lecture series include “The Race Card and the Trump Card: New Challenges and Familiar Frustrations,” “Me Too: The Movement to Empower Survivors,” and “Not Just Race, Not Just Gender: Being a Woman of Color in the Workplace.”

In addition to the speaking events, RWU asserts that "faculty members incorporate the annual theme into courses and projects and student clubs and organizations adopt the theme into their discussions and events."