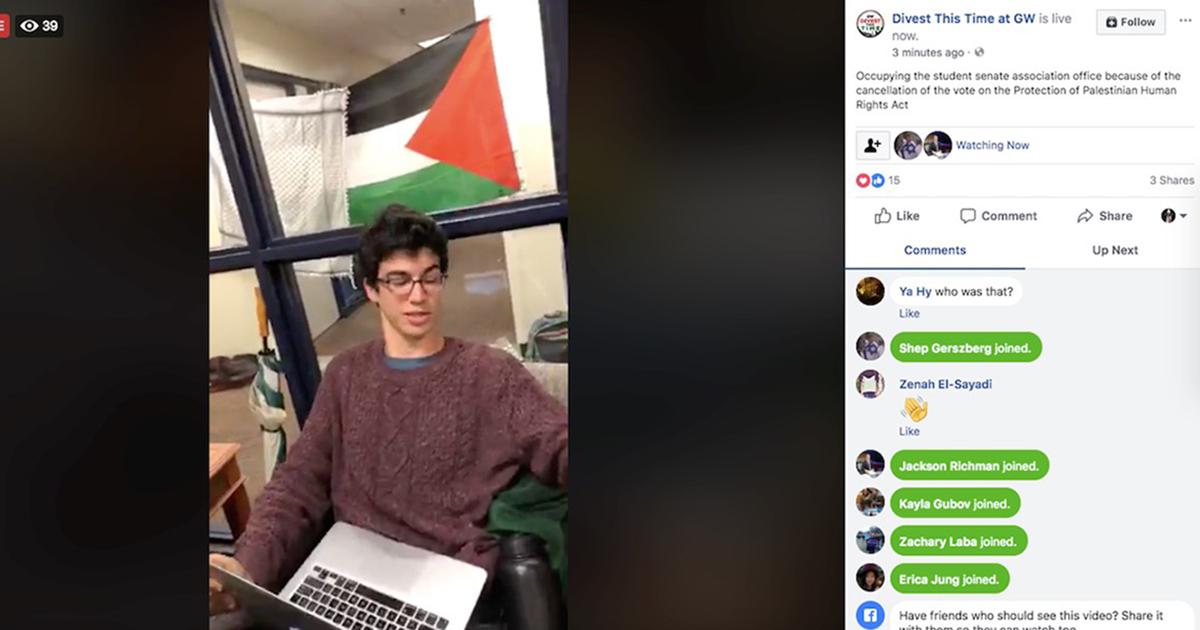 George Washington University’s Student Association was forced to cancel a vote on a controversial BDS bill due to safety concerns, leading pro-divestment students to occupy the senate office.

As Campus Reform recently reported, the Student Association was set to vote for a second time on a BDS resolution that failed to pass last year.

"I hope they will take their feelings of frustration and do something more productive than a sit-in with it."

However, in a Monday statement, the Student Association announced that it would be cancelling its meeting after campus police refused to provide security for the vote despite repeated requests to do so.

“Despite repeated requests made by the Student Association to the GW Division of Safety & Security, GW Police Department has rejected all requests for posted security in Funger. There are significant security concerns for both students and Senators that are going unaddressed by the university,” the statement noted.

As a result, campus groups Divest This Time and Students for Justice in Palestine (SJP) started an occupation of the Student Association office shortly after the meeting was called off and hung Palestinian flags in the governing body’s offices.

In a statement of its own, Divest This Time agreed that security presence was necessary, but only because “threats against Palestinian students and allies have clearly heightened this year,” calling such students “the most marginalized student population on campus.”

The group asserted that student senators were “feeling unsafe” due to “targeted threats” in the form of flyers posted on campus by a group called Canary Mission.

At the sit-in, SJP and Divest This Time GW prepared a list of demands which they plan to present to the university, including a “guaranteed vote” on the BDS bill on April 23, a campus police security detail at the meeting, and guaranteed seating for supporters of the bill.

Sophomore Shep Gerszberg, conversely, told Campus Reform that he hopes the bill we “be tabled indefinitely.”

“I’m happy that it wasn’t voted on tonight and hope that it will be tabled indefinitely. There is a better bill to be found here, one that deals with human rights in general rather than focusing on Israel exclusively,” he commented. “I hope they will take their feelings of frustration and do something more productive than a sit-in with it. Sit-ins do nothing.”

Another post from Divest This Time GW encouraged students to a sign a petition demanding the university provide security for a vote on the BDS bill, claiming that the student association “caved to exterior racist pressures” by cancelling the originally scheduled vote.

Tuesday morning. Divest This Time announced the end of its sit-in with a statement claiming victory, saying the demonstration had “resulted in the rescheduling of the hearing for SR-S18-21,” which will now take place on April 23.

“Rescheduling the vote was one of our top priorities, along with a statement from the Student Association explicitly explaining why the initial meeting was cancelled,” it added.