Iranian Studies prof blames Israel for all the world's ills 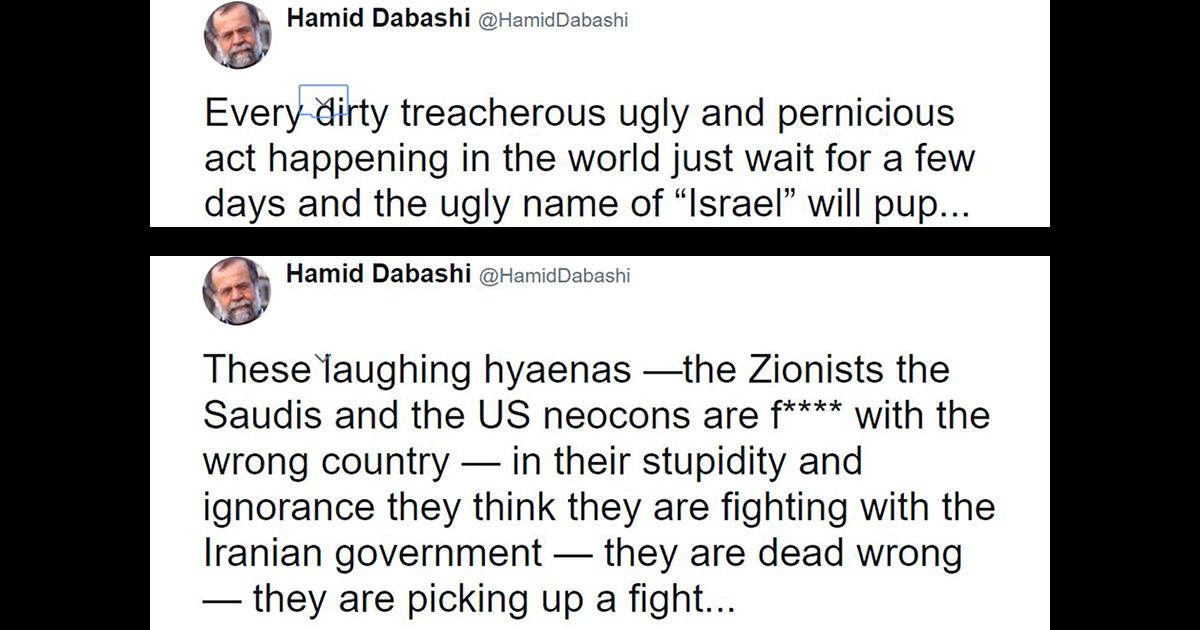 An Iranian Studies professor at Columbia University in New York has come under fire for a tweet blaming Israel for “every dirty treacherous ugly and pernicious act happening in the world.”

Hamid Dabashi, who also teaches comparative literature, tweeted Monday that Israel is responsible for all the “dirty” things happening in the world, in response to a New York Times article accusing an investigation firm created by former Israel Defense Forces intelligence analysts for gathering “dirt” on Benjamin Rhodes, who was a national security aide to President Barack Obama.

"Blaming the Jewish state for every problem in the world is virulent anti-Semitism, echoing rhetoric that has led to oppression and violence against Jews for centuries."

“Every dirty treacherous ugly and pernicious act happening in the world just wait for a few days and the ugly name of ‘Israel’ will pup…,” Dabashi wrote.

“These laughing hyaenas —the Zionists the Saudis and the US neocons are f**** with the wrong country—in their stupidity and ignorance they think they are fighting with the Iranian government—they are dead wrong—they are picking up a fight…,” said Dabashi in a tweet.

Rena Nasar, the Tri-State Campus Director for StandWithUs, a pro-Israel organization, told Campus Reform that the tweets represent a long-standing form of anti-Semitism.

"Blaming the Jewish state for every problem in the world is virulent anti-Semitism, echoing rhetoric that has led to oppression and violence against Jews for centuries,” said Nasar. “Unfortunately, this is unsurprising coming from a professor with a long history of racism against Jews and Israelis. Columbia University should unequivocally condemn this hate coming from one of its faculty members."

This is not the first time that Dabashi has had harsh words for Israel, either.

As Campus Reform reported, the professor tweeted in February that he believes the Women’s March has become “deeply infiltrated” by “Zionists,” whom he called “Master thieves.”

In March, the professor wrote on Facebook that Israel has a role in every negative world event.

“Every nefarious hateful racist fanatical retrograde genocidal atrocity in this world look closer Israel has a role in it,” Dabashi declared.

In a 2016 Facebook post, moreover, the professor degraded Zionists as “fine specimen” with a “hateful ideology,” then criticized President Barack Obama for enabling “their incremental genocide of Palestinians on the tune of 38 billion dollars over the next decade beyond his own term in office.”

Columbia University did not respond to a request for comment from Campus Reform.

UPDATE: Dabashi's Twitter account had been temporarily deactivated at the time of publication, but has since been restored.